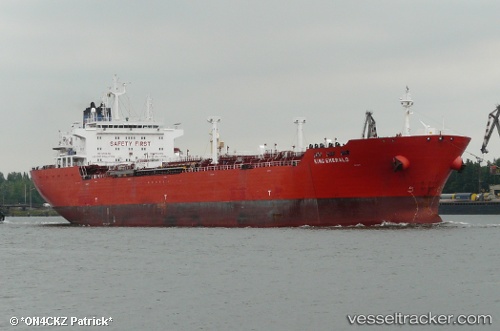 The "King Emerald" after having arrived from Purfleet, was in collision with the cargo m/v "SE Pacifica" ten kilometers off the coast of Nieuwpoort and De Panne in the evening of Aug 20, 2016. The accident happened in the Westhinder anchorage area when one of the ships went adrift in strong winds. The tug "Zeehond" (IMO: 8843549) was called to assist. The "SE Pacifica" suffered severe damage at starboard side in the stern region and the superstructure and was towed to Flushing for repairs, the "King Emerald" which had suffered minor damage at the starboard side foreship headed to Antwerp for repairs and berthed at Antwerp Shiprepair on Aug 22 at 10.30 a.m. Belgian report with video: http://nieuws.vtm.be/binnenland/203884-olietanker-botst-op-vrachtschip

Two European shipping firms were ordered on Tuesday to pay a $10.4 million (6.7 million pounds) penalty and given four years probation for illegally dumping oil-tainted bilge water as well as falsifying records. The firms - Columbia Shipmanagement GmbH of Germany and Columbia Shipmanagement Ltd of Cyprus - admitted to illegal activity on three oil tankers and one container ship, including bypassing the use of required pollution prevention equipment. Both firms are subsidiaries of Schoeller Holdings Ltd, a closely-held shipping and hotel company based in Limassol, Cyprus. The companies in March pleaded guilty to obstruction of justice, making false statements and failing to maintain accurate oil record books, which are inspected by the U.S. Coast Guard. More to read at http://uk.reuters.com/article/2013/07/23/uk-usa-crime-shipping-idUKBRE96M16320130723