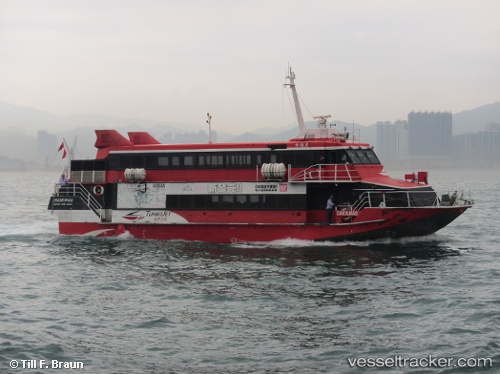 On Oct 10, 2015, around 5 p.m. a fire erupted in the engine room of the "Cacilhas" in Hong Kong, while the vessel was en route to Macao with 134 passengers on board. The ferry had just left the Sheung Wan ferry terminal, when flames shot out of the starboard side funnel. The fire brigade responded immediately and arrived in time to put out the flames. Initial investigations suggested that a malfunctioning machine caused the fire. Black smoke was seen billowing from the vessel after it was dragged to the Hong Kong–Macau ferry terminal in Sheung Wan. All passengers were moved to the lower cabin as soon as the incident occurred. Report with photo: http://macaudailytimes.com.mo/no-injuries-from-turbojet-fire.html

Number of injured at 70

The number of people injured when the high-speed ferry "Cacilhas" hit the southern breakwater near the Macao Outer Habor Terminals on June 13 at 9.30 a.m. LT with 220 passengers with 35 knots rose to 70. On board were 220 passengers and 13 crew members. An hour after its departure, when the vessel was ready for mooring, it rammed into the seawall and listed to its starboard side. Passengers remained calm and followed instructions to wear life vests. Rescue boats dispatched by the Macau government arrived at the scene to evacuate passengers. 45 men and 25 women between 17 and 69 years were hurt. 59 were coming from Hong Kong, four from Macao, four from South Korea, one from Japan and two were Thais. Also nine crew members were among the injured. None of them was seriously injured. Report with video: http://www.themalaymailonline.com/world/article/seventy-injured-in-macau-jetfoil-accident-video

The "Cacilhas" while heading from Hongkong to Macau crashed into a breakwater on June 13, 2014, leaving 58 people with minor injuries. The hydrofoil was carrying 220 passengers and 13 crew members when it hit the seawall at about 9:30 a.m. after departing from nearby Hong Kong about an hour earlier. 57 passengers were injured, including eight Thais, four Koreans and one Japanese, and that one crew member suffered a waist injury. All were taken to a hospital and 50 have been released. The boat, steered by a captain with 34 years of experience, was traveling at 35 knots in fine weather at the time of the accident. Report with photo: http://www.ctpost.com/news/world/article/Macau-fast-ferry-hits-breakwater-injuring-58-5549493.php