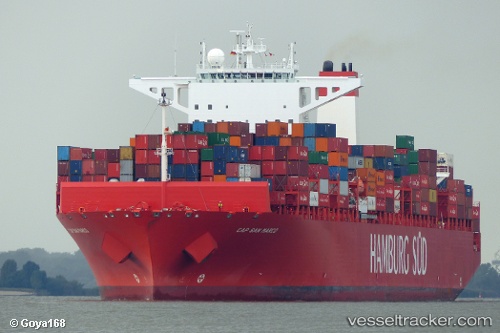 The "Cap San Marco" was attacked and boarded by five armed criminals from speed boat in the morning of Dec 2, 2018, on Santos outer anchorage. The ship was waiting for berth at Santos when the attack occurred. A Filipino sailor who was on guard was taken by surprise, seized and tied up. The criminals stayed on board for 45 minutes and then fled. The police suspected one more attempt to load cocaine on board and hide it in containers, in a manner similar to other incidents during this year. After the ship was berthed, it was thoroughly searched and one broken container found with no drugs inside. Another container which couldn’t be accessed by the criminals without moving others, contained 402 kilos of cocaine which was loaded ina previous port of call, assumedly in Paranagua, because the container was already on a suspicion list. The cocaine was bound for Europe.

Lay up in Hamburg ended

After having been laid up for 16 days the "Cap San Marco" left the port of Hamburg again on Jan 26, 2015, being bound for Antwerp as next port of call.

Hamburg Süd, the 12th largest container carrier in the world, is the latest shipping line to make Westports Malaysia in Port Klang its home. Its vessel "Cap San Marco", with capacity of 9,600 twenty-foot equivalent units (TEUs) and one of 12 units between 8,500 TEUs and 9,600 TEUs deployed in the South America Service (ASIA 2), called at Westports for the first time on Saturday, July 20, 2013. The ASIA 2 service will see Westports further expanding its services coverage between South America and the Far East, improving the delivery time and connectivity for cargo shipped via the port.