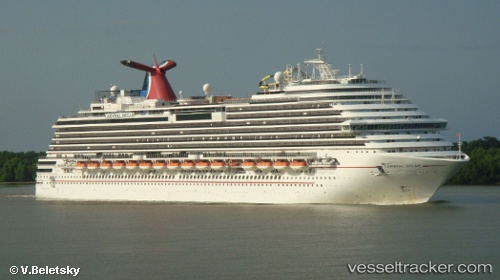 The US Coast Guard medevaced passenger from the 'Carnival Dream' approximately 23 miles south of Southwest Pass, Louisiana on Nov 21, 2021. Coast Guard District Eight watchstanders received a call at approximately 10:58 a.m. stating a man was experiencing issues breathing aboard the cruise ship, stemming from previous medical conditions. Watchstanders coordinated the launch of a Coast Guard Air Station New Orleans MH-65 Dolphin helicopter crew. The helicopter crew arrived on scene, hoisted the passenger and a Carnival Dream nurse, and transferred them both to University Medical Center in New Orleans, Louisiana. The man was last reported in stable condition.

The US Coast Guard medevaced a passenger from the 'Carnival Dream' off Galveston, Texas, in the evening of Feb 13, 2020. The oast Guard Sector Houston-Galveston watchstanders received a request from the master of the vessel for the medevac of a 40-year-old female passenger reportedly in need of medical attention. A Coast Guard Station Galveston 45-foot Response Boat-Medium boat crew arrived on scene and transferred the patient, her spouse and a member of the Carnival Dream’s medical staff to awaiting emergency medical services personnel at Station Galveston. The passenger was reported to be in stable condition.

Ship on a cruise to nowhere

The 'Carnival Dream' has been delayed arriving back at its homeport after spending most of Jan 16, 2020, anchored just off the Gulf coast near its homeport in Galveston, Texas due to heavy fog in the region. The ship was originally scheduled to arrive early in the morning but instead had arrived in the evening. As a result, those ending their 4-day Western Caribbean cruise which departed Galveston on Jan 11 have the option to remain on board overnight and disembark between 7:00 a.m. and 9:00 a.m. on Jan 17. Alternatively, guests can also disembark once the ship has arrived in port. The biggest impact comes to guests booked on the cruise which was scheduled to leave on Jan 17 at 3.30 p.m. Instead of enjoying a 4-day voyage to Cozumel they will now be spending all their time on the 'Carnival Dream' on a cruise to nowhere. The ship will operate a 3-day cruise but it still depends on the weather conditions. Guests who decide to go ahead with their vacation will receive a 50% refund and a 50% future cruise credit. They also have the option for a full refund.