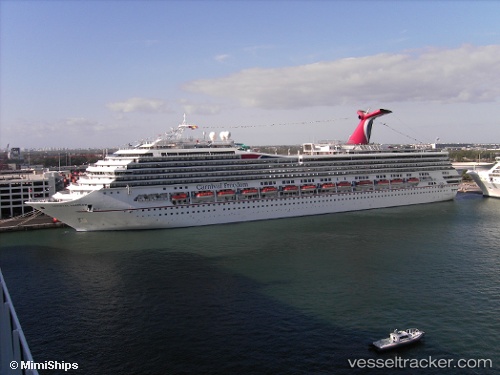 Carnival Cruises has refitted Carnival Freedom with new experiences in a three-week dry dock in Freeport, The Bahamas. The multimillion-dollar project has added a new waterpark, Bonsai Sushi Express and retail spaces to the cruise ship. The renovation was part of the line’s US$2 billion ship enhancement programme that has involved rolling out ‘Fun Ship 2.0’ innovations across the fleet. Among the new additions is the WaterWorks aquapark, which features a 203-foot-long AquaTunnel slide and Carnival’s signature Twister slide, as well as PowerDrencher tipping bucket and SplashZone area. The nine-hole miniature golf course has been relocated to Deck 11 and the deli on Deck 9 has been rebranded and expanded to offer sandwiches, paninis and traditional sides. The retail area has been extended to create a mall-style shopping area with different outlets.

The Coast Guard monitored the return of cruise ships, among them the "Carnival Freedom", to ports in Galveston, Texas, on Sep 1, 2017. The ship passengers were allowed to disembark at Galveston ship terminals after being stranded at sea for an additional six days due to Hurricane Harvey. The Coast Guard was working closely with federal, state, local and industry partners toward the recovery of Texas ports affected by Hurricane Harvey and to support safe, secure and efficient marine transportation. Report with photo: http://coastguardnews.com/coast-guard-monitors-return-of-cruise-ships-to-galveston-texas/2017/09/01/

Hurricane Harvey is rerouting cruise ships headed for Texas this weekend. The Port of Galveston in Texas has been closed because a Category 3 hurricane is barreling toward it. Harvey is currently about 70 miles east-southeast of Corpus Christi, Texas, according to the National Hurricane Center. It is expected to make landfall late Friday or early Saturday on the central Texas coast. Carnival Cruise Line's Freedom and Valor ships were supposed to disembark in Galveston on Saturday. They are currently at sea and "will remain a safe distance from the storm," a spokesperson said in an email. Both ships will stop in New Orleans on Saturday to replenish fuel, fresh water and food supplies. Guests have the option to end their cruise there.