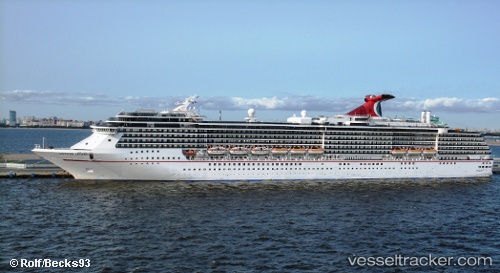 A Coast Guard aircrew medevaced a 76-year-old man from the 'Carnival Legend' approximately 140 miles east of Wilmington, N.C., in the evening of Dec 13, 2021. Watchstanders at the Coast Guard Fifth District Command Center received the request for medevac from the captain of the vessel, stating that a man aboard was suffering from symptoms of kidney failure. An MH-60 Jayhawk aircrew from Coast Guard Air Station Elizabeth City rendezvoused with the cruise ship and hoisted the man into the aircraft. The man was taken to the New Hanover Regional Medical Center in Wilmington for treatment.

The 'Carnival Legend' while sailing off the coast of the Bahamas in the morning of July 1, responded to a distress call of a yacht that had run out of fuel. They were able to provide the small ship with about 25 gallons of diesel fuel, which allowed the vessel to make its way back to Jacksonville, Florida. The 'Carnival Legend' is currently biding its time off the coast of the Bahamas during the cruise industry’s suspension of operations. Report with photo: https://cruiseradio.net/carnival-cruise-ship-assists-stranded-vessel-in-bahamas/