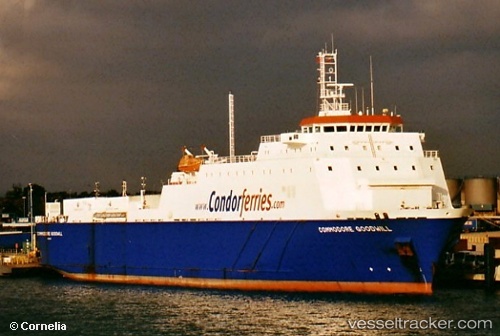 On March 17, 2020, the 'Commodore Goodwill' was involved in a dramatic rescue after saving a man drifting on a capsized dinghy through the Alderney Race. At 11.45am, the ship was sailing five miles east of the northernmost Channel Island, bound for Portsmouth, when its crew spotted the sailor. Upon seeing the man, the crew launched one of its lifeboats and took him on board. At the same time, the Guernsey Coastguard launched the Alderney all-weather-lifeboat which brought the man to shore before he was transferred to hospital. He had been on his yacht when he transferred to the dinghy, which became separated from the main vessel. It was not yet known if the man was injured or how long he was with the upturned dinghy for.

Ferries to be disrupted by new work on vessel

CONDOR Ferries passengers are facing disruption for two weeks this summer when one of its ships goes into dry dock. The freight-only Commodore Goodwill is to be taken out of service between 19 June and 3 July to enable further work to be carried out following a short dry-dock period last autumn. To maintain supply links between the Channel Islands and the UK, the passenger and freight ship Commodore Clipper, which usually operates an overnight service to Portsmouth, will switch to a southerly night-time crossing. Passengers booked onto the Clipper are being contacted and offered a transfer onto the Liberation fast ferry at no extra cost. If they wish, they will instead be offered a full refund. Read more at http://jerseyeveningpost.com/news/2016/04/29/ferries-to-be-disrupted-by-new-work-on-vessel/#HB2KUF1o22qCT35g.99

Condor ferry started an investigation into how a burger van from the Battle of Flowers funfair rolled off a loading ramp of the "Commodore Goodwill" on Aug 13, 2013, and sank to the bottom of the harbour in Portsmouth. The van, which was returning to the UK after two weeks in Jersey, was being loaded onto the Commodore Goodwill freight ship shortly before 9 a.m. by the stevedores at the harbour when it became unhitched from the small tractor pulling it. It then rolled out of control, down the ramp and off the edge, smashing into a number of pieces and sinking within minutes. The company was now working closely with the Port of Jersey and the company that had been overseeing the loading, Solent Stevedores, to find out what had happened. A full investigation was to be carried out, the smashed van meanwhile recovered. Report with photo: http://www.thisisjersey.com/news/2013/08/14/investigation-launched-after-burger-van-rolls-off-condor-ferry-loading-ramp/