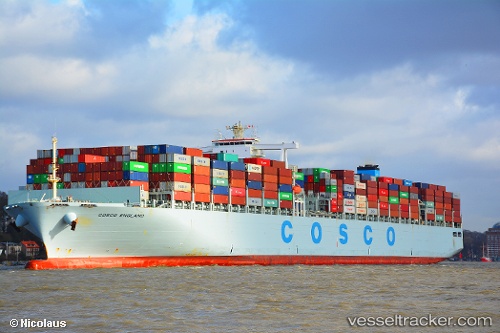 The 'Cosco England' drifted aground on Oct 7, 2019. at 11 p.m. at the outer anchorage of Vladivostok near the Skrypleva islet lighthouse. The ship was receiving bunker fuel from a tanker, when in a sudden squall the anchor dragged, and the container ship started to drift. The bunkering operation was stopped, the tanker unmoored and safely moved away. The Vladivostok Naval Rescue Coordination Center deployed the tugs 'Dobrynya' and 'Bogatyr' as well as pilot boats which assisted in the subsequent refloating attempts which succeeded on Oct 8 at 02.30 a.m. The ship dropped anchor off Vladivostok at 8.30 a.m. in pos. 43° 2.47' N 132° 0.04' E. Russian reports with photos: https://primamedia.ru/news/863669/ https://www.maritime.bg/61368-2/ https://www.vesti.ru/doc.html?id=3197176&cid=17

The "COSCO England" allided with the "Ever Birth" while berthing at Port Kelang on April 21, 2019, while approaching the wharves of Westports through the South Channel. Four containers from the "Ever Birth" fell into the sea following the allision. Other containers on deck were damaged in stowage. Some damages to the hull was also reported. The extent of damages to the "COSCO England" was not yet known. Both vessels were safely secured alongside to commence their operations, and at the same time, relevant authorities commenced their investigation of the incident. Both vessels were presently conducting relevant surveys and repairs for the next seven days.

During a storm in the afternoon of Jan 10, 2014,the mooring lines at the bow of the "Cosco England" which was moored at HHLA Container Terminal Tollerort in Hamburg broke. The bow was pushed eastward due to heavy wind eastwards and alided with the"Kronprinz Quay on the other side of the basin. The tugs "Bugsier 7", "Bugsier 8" and "bugsier 9", later joined by the "Bugsier 21" came for assistance and moved her back to the Tollerort Quay. In the late afternoon the tugs were still securing and pushing her against the quay, later in the evening having been released by the "Fairplay X", "Peter" and "Bugsier 2". Photo: http://www.shipspotting.com/gallery/photo.php?lid=2170638