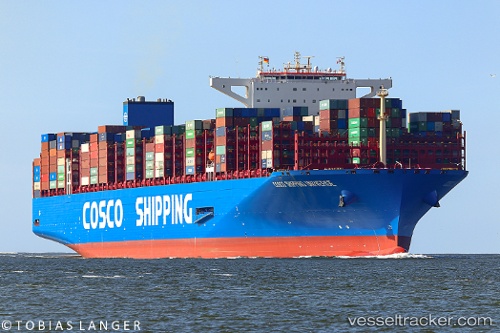 The Port of Hamburg was one of those called by one of the world’s largest containerships during her maiden voyage. With her slot capacity of 21,237 TEU, the ‘Cosco Shipping Universe’ set a fresh record in the Hanseatic City. The ULCS – Ultra Large Container Ship – berthed at HHLA’s Tollerort Terminal towards 22:30 on 19 July, sailing again on Sunday night. With a length of 400 metres, width of 59 metres, drawing 18 metres and reaching up to 22 knots, the newbuild operates in liner service along the maritime Silk Road between Europe and Asia.

The handing over of China’s largest container ship, Costco Shipping Universe, from builder to owner was completed early on Tuesday. The vessel, which has a capacity of 21,237 twenty-foot equivalent units (TEU) and was built by state-owned enterprise China State Shipbuilding Corporation (CSSC), was successfully transferred to China COSCO Shipping Corporation Limited, according to a report by China Central Television. The ship is 400 metres in length, 58.6 metres wide, has a travel speed of 22 nautical miles per hour (25.3 miles per hour) and is able to carry a maximum of 198,000 tonnes of cargo. Another five 21,000 TEU containerships, as well as a further four 22,000 TEU cargo ships, will be delivered to China COSCO Shipping between the final few months of 2019 and the beginning of 2020. The vessel is set to sail along the 21st Century Maritime Silk Road, which links China’s coast to Europe and Africa through the South China Sea and the Indian Ocean. The ship will both become a flagship vessel for this route and help to implement China’s Belt and Road Initiative, which was proposed by Chinese President Xi Jinping in 2013 to promote China’s trade with around 70 countries in Asia, Europe and Africa. Source: GBTimes