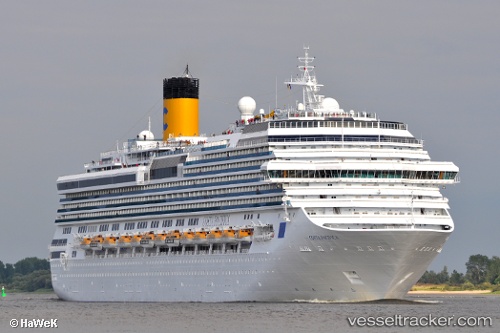 Passenger jumped over board

A 75-year-old passenger jumped overboard from the "Costa Pacifica" from the balcony in her cabin. The woman's body was found on the morning of Oct 11, 2019, off the coast of Spain. The ship was sailing between Funchal and Malaga at the time of the incident on Oct 10. After the woman's cabin mate alerted the ship's crew, the captain turned the ship around to search for the passenger and alerted authorities. The Costa care team moved to provide full assistance to the travel partner and parents of the missing guest.

In the afternoon of May 12, 2019, the Helimer 203 helicopter of Salvamento Marítimo medevaced a 71-year-old passenger from the "Costac Pacifica" which was sailing about 19 miles south of the Sabinal lighthouse. The patient, who suffered from pulmonary edema, has been transferred to the Torrecárdenas hospital in Almería.

Costa Cruises celebrated its 70th anniversary on 28 May, marking the occasion during an exclusive 12-day cruise for CostaClub members onboard Costa Pacifica. Around 3,000 CostaClub members from 18 different countries joined the voyage, which visited destinations in the Mediterranean and included a programme of events. To commemorate the anniversary, French pastry chef Christophe Adam created a three-metre-high pyramid of his famous Éclair de Génie (pastry cakes) and long-term Costa partner and chef Bruno Barbieri directed a cooking event that involved a number of CostaClub members preparing dishes. Barbieri also presented his new menu created exclusively for Costa ships. American singer Gloria Gaynor gave a concert in the ship’s theatre and Neil Palomba, president of Costa Cruises, cut a large celebratory cake.