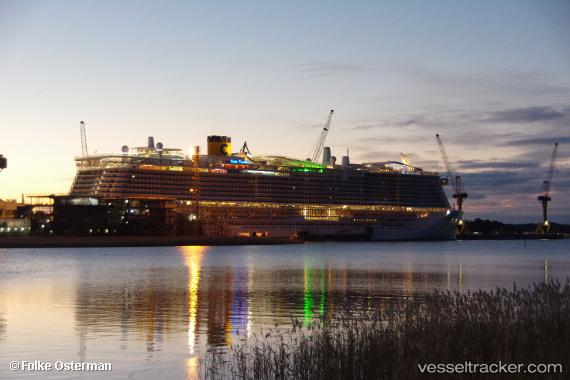 On Oct 28, 2022, the medical evacuation of an 85-year-old German woman with respiratory problems and Covid was requested from the 'Costa Toscana' about 1,5 miles from Valencia. The CCS Valencia of Salvamento Marítimo mobilized the SAR boat 'Salvamar Pollux', who disembarked her along with her two children to the port, where an ambulance was waiting for her.

On Sep 28, 2022, the 'Costa Toscana' had to divert from its scheduled route from Naples to Ibiza to drop off an 80 year old British passenger with a probable intestinal ulcer, strong retching and positivity to COVID 19. The ship approached the Gulf of Cagliari, where the patient was taken off by the patrol boat 'CP 320' and transported to a hospital for further medical care.The ship was on a voyage from Savona to Civitavecchia, Naples, Ibiza, Valencia and Marseille.

Medevac in Gulf of Cagliari

On July 6, 2022, at 10.10 a.m. th Harbour Master's Office of the Coast Guard of Cagliari received a request for a medical evacuation of a 6-year-old child, of Italian nationality, suffering from suspected appendicitis on board the 'Costa Toscana', which was sailing about 15 miles southeast from Cape Carbonara en route to Ibiza. The patrol boat 'CP 811' was deployed to the ship in the Gulf of Cagliari, about eight miles south of the city. The child was taken off and taken to the port of Cagliari for the subsequent transport to the Brotzu hospital in Cagliari.