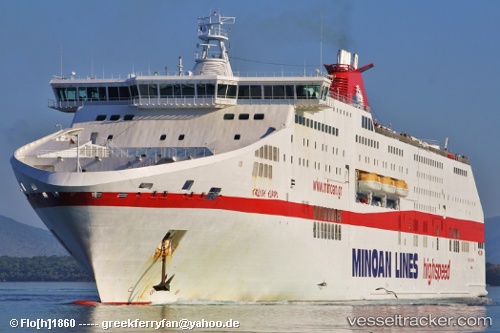 A 24-year-old Afghan migrant, who was found dead inside the car deck of the 'Cruise Europa' that reached Ancona from PAtras on Aug 6, 2020, had an application in his pocket asking for the possibility of obtaining the status of political refugee in Greece. Greek authorities had not processed his request yet. The young man was identified thanks to the document for the granting of political refugee status. The young man is believed to have died of asphyxiation in the hold of the ferry . Greek authorities had not ruled on his case yet. The ferry docked in Ancona shortly before 5 p.m. The migrant's lifeless body was discovered in the ferry's garage, where temperatures in the summer can reach 50 degrees Celsius. Officials believed that the man died a few hours before his body was found while the ferry, which departed from Patras and stopped in Igoumenitsa, was at sea. Authorities were investigating the case to understand whether the youth boarded the ferry hidden in a truck. Maritime border police coordinating the investigation, led by Commander Stefano Santiloni, questioned the drivers whose trucks were near the area where the man's body was discovered. All the drivers said they did not notice the youth, according to officials. Prosecutor Ruggiero Dicuonzo is deciding whether to request an autopsy to understand the cause of death, investigative sources said. Officials have ruled out murder as the man's body did not have wounds or signs of violence and believe he probably died of asphyxiation, according to sources.

In the night of April 4, 2020, the 'Cruise Europa' allided with the breakwater at the port of Patras in the midst of the berthing process due to adverse weather conditions upon its arrival from Ancona. The ferry, which operated the Ancona - Igoumenitsa - Patras route, had 73 crew members and 56 truckers and a cargo of 55 vehicles on board. The allision caused two 20-centimeter-long cracks in the portside hull above the waterline and also internal damages. This route involved only the transport of goods, since the transit of passengers to and from Italy has been prohibited, due to the coronavirus epidemic. The Central Port Authority of Patras has banned the ferry from sailing until the presentation of a certificate of class - seaworthiness by the attendending classificatio society. The 36 truck drivers who were waiting to board in Patras, will be transoported with the company's care. The ship was remaining at the quay in Patras as of April 6. After the ferry completed its cargo discharge and an initial damage survey by the classification society, the vessel sailed to Yalova to carry out permanent damage repairs in a shipyard, where the ferry arrived and dropped anchor on April 15. The vessel remained at the anchorage due to quarantine. Upon confirmation from the health authority, the vessel will enter the shipyard.

The Corfu Port Authority was informed in the morning of Oct 11, 2019, by the captain of the 'Cruise Europa' about an incident with a 78-year-old passenger. The vessel was underway from Igoumenitsa to Ancona but returned to the port of Corfu, where the man was dropped off and transported by ambulance to the Corfu General Hospital, where he was hospitalized.