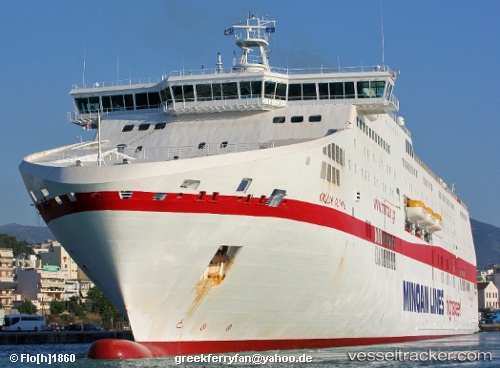 In the evening of Sep 24, 2019, the 'Cruise Olympia' operating the Ancona - Igoumenitsa - Patras route, suffered a damage to one of the pitch propellers. The ferry continued the voyage with the other ones. It was carrying 108 crew members and 273 passengers as well as 66 cars and 20 trucks. The ferry arrived in Patras with tug assistance on Sep 24 at 9.30 p.m. The port authority carried out a preliminary investigation and initially detained the ship. After an inspection and presentation of a class certificate by the attending classification society it left port again on Sep 25 at 5.10 a.m., headed to Igoumenitsa with an ETA as 11.30 a.m.

In the early hours of Nov 21, 2018, the Port Authority of Igoumenitsa was informed that during the boarding of the "Cruise Olympia", which was due to leave Igoumenitsa bound to Ancona, due to the adverse weather conditions, the stern ropes broke and broke lose two bollards on the quay, so that the ship went adrift. It could be brought under control by using its engines. Upon the arrival from Patras 139 passengers, 49 vehicles and 69 trucks were on board, while in Igoumenitsa another 263 passengers, 50 vehicles, 78 trucks and two buses were expected. During an inspection damage to the starboard side ramp was found, which could not be fastened. The ship was detained until repairs were carried out and a certificate of seaworthiness was submitted by the attending classification society. Video: https://www.facebook.com/Forecastweather.Greece/videos/987213474795835/

While maneuvering to the dock the "Cruise Olympia" allided with the berthed ferry "Hellenic Spirit" in the morning of July 20, 2018, in Igoumenitsa port. The latter didn’t suffered damages, whilethe "Cruise Olympia" sustained three cracks above the waterline at port side and was detained for repairs and inspection. The ship left Igoumenitsa in the evening of the same day.