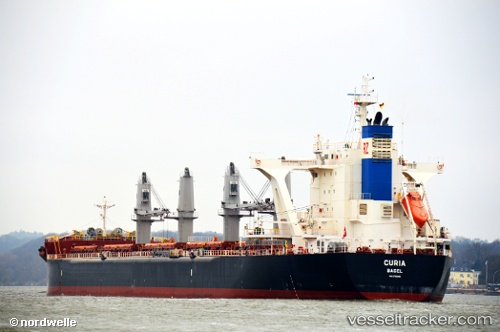 The 'Curia' suffered engine damage and has been berthed at the detached jetty in Algeciras since March 30, 2020, at 2.30 p.m., coming from Port Arthur where it had received VLSFO before sailing on Feb 29 and which had proved to be unsuitable for burning in the engines and caused quite some damages to the engine. The operator has put the charterers on notice and the FDD was involved. In Gibraltar a P&I surveyor attended the vessel with the charterer's surveyor. Class NK attended as well. The vessel has then shifted to Algeciras. It turned out that in all cylinders the piston rings were broken, except cylinder no. 1, which has been overhauled prior to the arrival. Spare parts have been sourced and found in Japan while piston rings were currently very difficult to obtain. Due to corona virus the delivery takes longer than usual, and the spares were expected to arrive on April 6. After repairs the ship headed to Kandla as next port of call and docked on April 30.

On July 16th 2015, TSUNEISHI GROUP (ZHOUSHAN) SHIPBUILDING, Inc., a Chinese Group Company of TSUNEISHI SHIPBUILDING, completed construction of “CURIA”, a“TESS58 AEROLINE” D/W 57,500 mt type bulk carrier and delivered to the ship owner. This vessel is the group’s 4th TESS58 AEROLINE. The TESS58 AEROLINE is a premium class vessel featuring the higher fuel efficiency design of the TESS58, part of the TESS (Tsuneishi Economical Standard Ship) product line. AEROLINE is a new technology for reducing wind resistance, which combines the cut-corner design for the accommodation corner in previous models with a newly developed streamlined shape for the fore upper bow, for a 10% reduction in wind resistance. The fore upper bow has been rounded, giving the ship a stylish streamlined design. Fuel efficiency is further improved not only by the low-resistance hull design but also by the incorporation of proprietary energy-savings technologies and an electronically controlled engine. Source: TSUNEISHI GROUP (ZHOUSHAN) SHIPBUILDING, Inc.