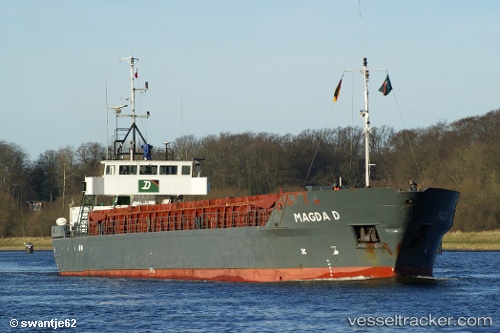 The Danish tug "Baltsund" (IMO: 9136307) has arrived at the grounding site of the "Darwin" on Aug 21. The tug had been deployed from Søby to Assens from where it sailed at 9.15 p.m. to the grounding site in order to refloat the vessel after approval of salvage plans. After the tug had successfully refloated the vessel and after a first investigation the cargo ship now headed to Kolding, ETA 3 p.m. She left the port of Kolding six days after having been salvaged on Aug 27 at 1.20 p.m., next bound to Frederiksvaerk, ETA Aug 28, at 6 a.m.

The "Darwin" ran aground in the late afternoon of Aug 18, 2018, off Årø with a cargo of sunflower meal on board in the southern Lillebælt n pos. 55° 16.17' N 009° 47.91' E. The Danish Navy Home Guard sent a ship to the site, but there were no reports of spillage from the ship. They issued a ban on sailing, so no attempt will be made to pull the coaster off before divers have examined the hull for possible damage. Then a salvage plan must be prepared that must be approved by the Danish authorities before the work gets started. The ship got stuck very close to a fish farm. It was underway from Hamburg to Kolding when the grounding occurred. The ship left Hamburg on Aug 17 and should have arrived at Kolding on Aug 18 at 10 p.m. There was no suspicion of drinking at the helm.

The "Darwin" was refloated in the Odense Fjord on Dec 24 at 6 a.m. by the tug "Svitzer Thor". It was taken to the Fayard Shipyard at Lindø, where further investigations started. She left the yard again after repairs on Dec 28 at noon, headed for Aalorg, where she arrived in the early morning of Dec 29, before proceeding to Kolding, ETA Dec 30.