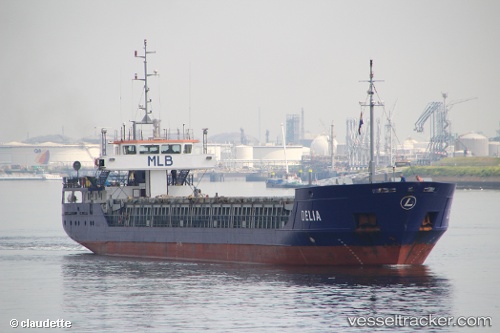 The "Delia" suffered engine trouble off the port of Ijmuiden on Jan 15, 2019, around midday. The tug "Pollux" of Iskes was called to assist and towed the ship to port. When arriving the harbour jetties, the "Saturnus" of Iskes joined the ships for a safe transit. The freighter was berthed at the trawler quay at 4.40 p.m. On March 19 it arrived at Rotterdam. Dutch photo report: https://www.tugspotters.com/app/content/2019/01/delia-met-pollux-saturnus/

The "Delia" suffered an engine failure in the evening of Jan 28 south of Løperen on Hvaler, short time after having left the port of Fredrikstad in stormy weather. The vessel dropped anchor, and the Norwegian lifeboat "Horn Flyer" was standing by, while waiting for the tug "Bebe" (IMO: 6423890). The "Delia" was then towed back to Fredrikstad, where she was safely moored at 10.50 p.m. Report with photo: https://www.fleetmon.com/newsroom/2015/6297/general-cargo-vessel-delia-suffered-engine-failure/

In the hold of the German, Antigua-Barbuda-flagged coastal freighter "Delia" (BRZ 1846) a sailor died. As the owner of the ship, Manfred Lauterjung, reported the Estonian on Wednesday climbed into the hold of the scrap-laden ship, "without telling anyone about it,". The accident happened on Wednesday in the traffic separation zone in the North Sea north of Borkum. After crewmembers had discovered the 43-year-old man lifeless in the hold, a rescue helicopter was requested, but the crew could only find the death of the sailor. Finally the ship reached Emden, where the corpse was handed over for transfer to Estonia. Once a replacement for the deceased man had arrived on board, the "Delia" with the full strength of seven man crew sailed again and continued the journey that begun in Denmark to El Ferrol, Spain.