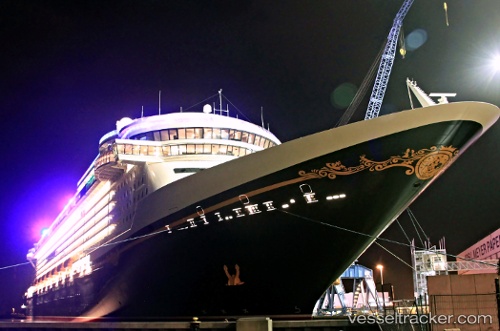 The 'Disney Fantasy' assisted the US Coast Guard vessels on Nov 20, 2022, in an SAR operation after a homemade refugee craft capsized in the ship’s vicinity. While most of the refugees were rescued, several individuals were reported to have drowned before rescue vessels arrived. The ship had a day at sea when the call came in from the USCG, and it stopped to offer support. USGS boats and planes were also involved in the activity. The incident occurred approximately 50 miles south of Little Torch Key, midway between the Florida Keys and Cuba. While the overall weather in the area was clear, the waves were averaging 6-8 feet with winds of 30 miles per hour. The migrants who drowned were not wearing lifejackets or other floatation devices. The cruise ship resumed its voyage from Port Canaveral to Cozumel with an ETA as of Nov 21. There was no indication that there would be any need for port schedule changes or other alterations to the ship’s itinerary. The 'Disney Fantasy' was currently sailing a 7-night roundtrip Western Caribbean itinerary, having departed Port Canaveral on Nov 19. Report with photos: https://www.cruisehive.com/disney-cruise-ship-assists-in-search-and-rescue/88363

Disney Cruise Line was facing four federal lawsuits from Utah and Arizona tourists who claimed they contracted the coronavirus while on board the 'Disney Fantasy' in March 2020, just before the cruise business docked during the pandemic. The tourists said they contracted the virus while on board and began feeling sick, according to the four lawsuits filed on March 2, 2021, in federal court’s Orlando division that each seek unspecified damages. Disney Cruise Line disagreed with the allegations and will respond to them in court. No guests or crew reported symptoms of Covid-19 while aboard the vessel during the March 7, 2020, sailing. Disney Cruise Line communicated health and safety information with guests in advance of and during their sailing and had numerous protocols in place at the time. The lawsuits accused Disney of refusing to let passengers cancel or reschedule their cruises even if they had “autoimmune diseases and compromised health conditions,” so they were “left without any option” to go on their March 7-14, 2020 trip. According to a Disney email sent to passengers, guests were allowed to change their reservation up until the day before embarkation to receive a 100 percent cruise credit. The four plaintiffs retained the same Miami law firm and their complaints were similarly phrased in the court documents. The plaintiffs were Arizona residents Judy Parkin and Krystal Skinner and Utah residents Kailee Taylor and Scott and Jana Olsen. The attorneys representing the four lawsuits, Stefanie Black and Jason Margulies, did not return messages. The lawsuits provide brief details on the plaintiffs and their children’s symptoms. After the ship returned, the lawsuit claimed, Scott and Jana Olson’s child was taken to a hospital intensive care unit on March 16, 2020, with a high fever and difficulty breathing. The child, who had an unspecified autoimmune disease tested positive for COVID-19 on May 1, the lawsuit said. The parents also tested positive. One of Krystal Skinner’s children also had an autoimmune disease that wasn’t specified in the lawsuit and felt body aches, fever, chills and a cough on the cruise. Her other child, who has asthma, had migraines, a high fever and difficulty breathing. Both tested positive for COVID-19 on April 15. Their mother also felt sick on board and tested positive the same day as her children, according to the lawsuit.

A group of 53 Disney Cruise Line staff returned to Trinidad and Tobago aboard the 'Disney Fantasy' after being trapped at sea due to restrictions by Covid-19. The crew disembarked in two lifeboats and from the cruise ship complex they were transferred to a campus of the University of the West Indies (UWI), where they will carry out their 14-day quarantine period. Because Trinidad and Tobago's borders remained closed to prevent the spread of the coronavirus and flatten the curve, the crew experienced weeks of uncertainty, during which numerous emails were sent to the Minister of Homeland Security, Stuart Young, requesting the landing. Past week, Young has agreed to allow Trinidadian crew members caught on cruise ships to return home. On May 23, six crew members from the 'Caribbean Princess' cruise ship were allowed to re-enter the country and immediately brought to the UWI campus to fulfill the quarantine period, and there were still more than 300 Trinidadians on another cruise ship, the 'Visions of the Seas'. Regarding this ship Minister Young explained that he was in contact with the owners of the ship to ask them to anchor in Trinidad and Tobago and quarantine the nationals on board the ship for 14 days. In case the owners of the ship accept the proposal of the minister, the Trinidadian crew will be evaluated and monitored on board the ship and when their quarantine ends, they will be allowed to disembark to return directly to their homes.