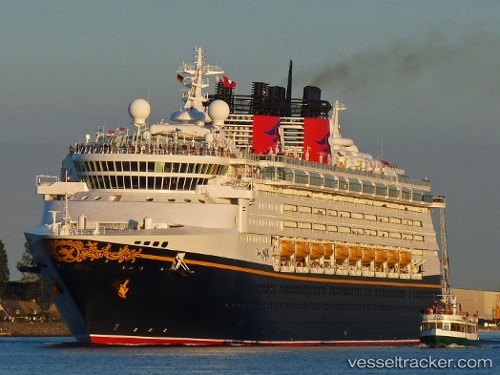 Rescue teams were called on Sep 3, 2021, after a passenger of the 'Disney Magic' was injured in a fall on board. The casualty had dislocated the shoulder and had been treated by the ship's doctor. At 9 p.m. Tynemouth RNLI and the Tynemouth Volunteer Life Brigade (TVLB) were asked to help after a passenger hurt the shoulder and had to be taken to the hospital. The ship was off the coast of Tynemouth when the crews arrived to transfer the patient onto the lifeboat where after a care assessment he was provided pain relief on trip back to the Tynemouth Lifeboat station where they were met with Tynemouth Volunteer Life Brigade who took the casualty to hospital. Report with photo: https://www.chroniclelive.co.uk/news/north-east-news/lifesaving-crews-called-disney-magic-21484778

A Coastguard helicopter from Caernarfon was deployed to the 'Disney Magic' in the Irish Sea on July 28, 2021, at 7.25 a.m. for a medical emergency. A crew member was winched down onto the ship and remained on there for around 20 minutes. Then the patient was from the ship onto the helicopter and taken to a hospital in Rhyl. The ship had set off from Liverpool for a three-day cruise. Report with video: https://www.cheshire-live.co.uk/news/chester-cheshire-news/dramatic-disney-cruise-ship-irish-21165598

Disney Magic to be fitted with new venues and dining experiences

Disney Cruise Line is to add several new venues to Disney Magic ahead of her homeporting season in Miami, Florida, which starts in March 2018. Families will be able to participate in the new ‘At Rapunzel’s Royal Table’ dining experience, enabling them to meet characters from Disney film Tangled and enjoy themed live entertainment throughout their meals. Menus will also themed. Guests aged 14-17 will be able to head to the refurbished Vibe club, which will feature a coffee and smoothie bar, video and virtual reality games, a DJ deck and movie making facilities. Club Disney Junior will also be added to the Oceaneer Club venue for young children. Other highlights will include the redesigned adults-only Cove Café, the renovated Signals Bar, and the updated Rainforest Room with steam and hydrotherapy in Senses Spa for adults. Disney Magic will resume service with four- and five-night cruises from Miami on 9 March, sailing to Key West, Florida; Nassau, Bahamas; and Disney’s private island, Castaway Cay. She will then reposition to Europe to begin her summer season on 14 May.