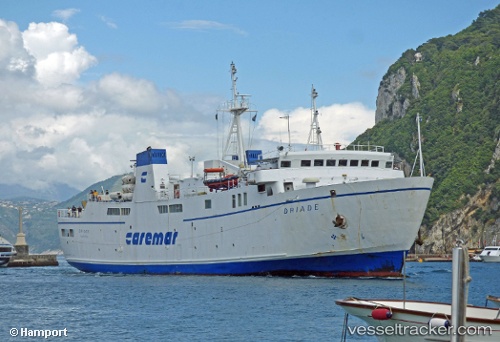 On Jan 6, 2020, at 7.25 a.m. the 'Driade' went adrift in the port of Ischia at the mercy of the strong winds in the Gulf of Naples after dropping the moorings to make the schedlued sailing to Procida and Pozzuoli. However, it was unable to take off while remaining dangerously adrift moving towards the Redentore Pier, without, however, there was only a slight impacting on the quay and no to other ships thanks to the skills of the captain. There were 20 passengers and six cars on board. After about an hour and thanks to the intervention of the Harbor Master's Office and the mooring crews, the ship could be secured with large cables and anchored at the docks. The passengers were disembarked and many changed to other companies ot reach the mainland. After checks of the instruments on board were carried out by the Coast Guard and did not reveal any failure, the ship finally left for Pozzuoli at 11.30 a.m. The emergency manoevers forced other ships and hydrofoils to wait off the port entrance until 8.20 a.m. when the 'Driade' was secured. Then traffic was resumed regularly. Italian reports with photos and video: https://napoli.repubblica.it/cronaca/2020/01/06/foto/ischia_traghetto_spinto_dal_vento_verso_la_banchina_paura_a_bordo-245094882/1/#1 http://www.teleischia.com/202503/ischia-nave-driade-alla-deriva-nel-porto-video-live/

On Dec 5, 2017, around 5 p.m. a fire broke out in the engine room of the "Driade" between Ischia and Procida, leaving the ship disabled and adrift with smoke emerging in dense columns. The ferry had left the port of Calata di Massa di Napoli at 3.45 p.m., bound for Casamicciola. The 12 passengers were taken off by the Coast Guard. The passengers, equipped with all the security devices, lowered first with a rope, were transported to the port of Ischia aboard the "CP 807" and two of them treated by the medical department of the Hospital Anna Rizzoli Lacco Ameno after the arrival in Naples at 5.30 p.m. The ferry left the port again on June 4, 2018, at 3.40 p.m. She resumed the ferry service to Capri with its first arrival at the Marina Grance at 78.45 p.m. the same day. The fire was brought under control by the crew. The ship was guarded by the Coast Guard until the tug "MN Agata" of Medmar arrived. At 7.40 p.m. the ferry got the permittion to enter the port of Naples, arriving there around midnight. Italian reports with photos and video: http://www.ildispariquotidiano.it/it/incendio-in-sala-macchine-per-il-driade-soccorsi-in-azione/ http://www.napolitoday.it/cronaca/incendio-traghetto-caremar-ischia-procida.html

The "Isola di Capri" allided with the berthed ferry "Driade" in the Massa Port in Naples on Nov 29, 2017, short after having dropped the moorings, being pushed by winds of five Baufort. She slammed into its port side with the starboard foreship. Both ferries sustained slight damages and were detained until the weather improved later that day. Due to the adverse weather conditions, there had already been a stop for hydrofoils, leaving the Gulf Islands isolated. 100 Korean tourists were stuck in the port of Naples but managed to sail aboard a Caremar ferry despite the weather conditions. The Civil Protection of the Campania Region had issued a weather warning alert for widespread rainfall with moderate and moderate thunderstorms throughout the territory. Italian report with photo: https://www.ilmattino.it/napoli/cronaca/mare_mosso_collisione_fra_traghetti-3397495.html