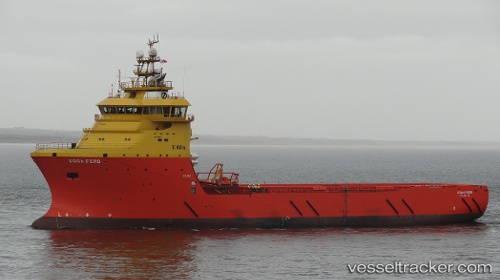 The 'Stril Myster' got out of control and allided with the berthed supply ships 'Edda Ferd' and 'Skandi Aukra' while maneuvering in the port of Aberdeen in the evening of Dec 10, 2019. All three ships suffered some damages. The 'Edda Ferd' sailed again on Dec 14 at 7.25 p.m. towards Hoylansbugte, the 'Skandi Aukra' left on Dec 11 at 9.20 p.m. towards the Northsea, while the 'Stril Myster' remained stationary in port as of Dec 16. The Marine Accident Investigation Branch (MAIB) was aware of the incident and making inquiries.

The newest addition to Haugesund-based Østensjø Rederi’s fleet carries a very unique hybrid power system based around a matrix of sophisticated lithium batteries from Vancouver-based Corvus Energy. Built at Astilleros Gondan in Spain in 2012 and delivered to Østensjø Rederi in 2013, Edda Ferd is an example of the new breed of highly efficient offshore support vessels (OSVs) currently being deployed around the world. “Our internal tests have been impressive, with quick charge rates and superior flexibility,” notes Johannes Østensjø, owner of Østensjø Rederi. For dynamically-positioned (DP) ships like the Edda Ferd, power requirements to keep the vessel precisely on station can fluctuate greatly, requiring the main power plant to ramp up and down to meet this demand. For diesel engines which operate most efficiently at high power, this means that while on station, the engines are, on average, operating outside of their most efficient power range. On board the Edda Ferd however, Corvus Energy’s AT6500 battery modules can deliver burst outputs up to 2 megawatts to supply the needed energy to keep the ship on station. Meanwhile, a reduced number of her MaK engines remain operating at optimum power level to charge the battery bank and provide base load power. http://gcaptain.com/edda-ferd-ostensjo-rederis-lithium-powered-osv/?utm_source=feedburner&utm_medium=feed&utm_campaign=Feed%3A+Gcaptain+%28gCaptain.com%29

The PSV Edda Ferd was delivered to Østensjø Rederi by Astilleros Gondan shipyard in Spain earlier this month. The vessel was due to sail for Aberdeen, where she will be delivered to Shell UK Ltd, for a long-term charter. Edda Ferd is described by Østensjø as "the world’s most environmentally friendly PSV" and has a new type of hybrid diesel-electric propulsion plant developed jointly by Østensjø and Siemens.