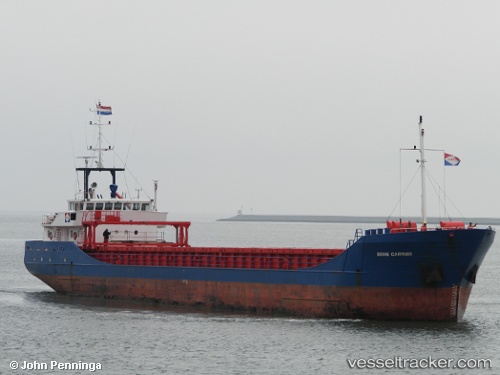 The Russian captain of the "Eems Carrier, who ran the shiip aground under influence of alcohol on Feb 21 off Langeland was convicted for drunk sailing at the court in Svendborg on June 19. The verdict was on a fine of DKK 20,000 and a denial of the right to guide a ship for one year. Initially, the drunken 49-year-old captain succeeded in getting the ship off the ground. However, he was ordered to drop anchor until the vessel had been examined for damage to the hull and possible leaks. The captain was taken to the police station in Odense, where a blood test confirmed that he was influenced by alcohol.

The "Eems Carrier", enroute from Vigeroe to Liepaja, ran aground off Langeland at Spodsbjerg on Feb 21, 2019, at 9.35 p.m. Initially, the captain managed to get the ship free again, but he was told to drop anchor.At the ship's helm was a 49-year-old Russian captain. Based on the radio contact the Funen police suspected that the captain was drunk. He was interrogated by the police in the morning of Feb 22 at the police station in Odense with an interpretor. The man had more than the maximum of 0.5 per thousand, though the analysis of the blood sample was not yet available. The captain was charged for violation of the Maritime Act as a result of drunk sailing. He may be released, may have an administrative deportation, or he may be detained which was up to the lawyers. It depended on how many offenses have been committed. There was no indication that the ship was leaking. The Armed Forces Operation Center sent an environmental ship to the scene. The "Eems Carrier" was directed to Nakskov once she was released in the run of Feb 22 and docked at berth 2 in the port at 2.15 p.m. She left the port again after investigations on Feb 23 at 2.445 p,.m. and resumed the voyage to Liepaja, ETA Feb 25, 4 p.m. Danish report with video: https://www.tv2fyn.dk/artikel/beruset-kaptajn-sejlede-fragtskib-paa-grund-ved-spodsbjerg