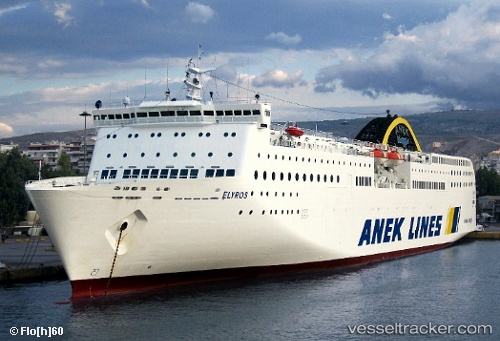 The Central Port Authority of Chania was informed in the evening of May 23, 2021, of the injury of a 64-year-old passenger of the 'Elyros' on the right wrist, while the ship was on its scheduled route from the port of Souda to the port of Piraeus. The ferry returned to Souda in order to disembark thepatient who was picked up by an ambulance and transported to the General Hospital of Chania. The ship then resumed its planned route. A preliminary investigation was carried out by the Port Authority.

The Port Authority of Chania was informed in the early morning of Noc 6, 2020, by the Captain of the 'Lyros' that a 75-year-old man was found unconscious inside the ship while the ferry was enroute from the port of Piraeus to the port of Chania. Upon the arrival of the ship in the port, the man was handed over to an ambulance which transported him to the General Hospital of Chania where his death was confirmed. An autopsy-necropsy was ordered by the Central Port Authority of Chania, which was conducting the preliminary investigation.

In the early morning of June 3, 2020, the Hellenic Coast Guard was informed by the captain of the 'Elyros' that the ship had suffered a mechanical damage to the port side main engine while sailing in the area north of Chania enroute from the port of Souda to the port of Piraeus, with eight passengers, 33 crew members and 55 vehicles on board. The ship reached Piraeus, where it safely disembarked its passengers, while the Central Port Authority of Piraeus banned the ferry from sailing until the repair of the damage and the presentation of a class certificate by the attending classification society. At 8.20 p.m. the ferry left port, bound to Souda, where it arrived on June 4 at 5.15 a.m.