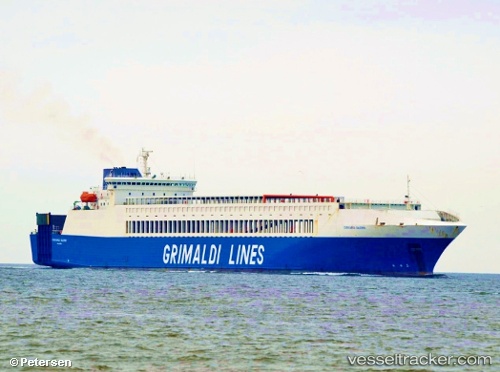 Ship on the move after half a year

After more than six months tied alongside at the Port of Southampton with technical issues, the "Eurocargo Salerno" on MAy 7, 2014, departed from the berth at the fruiti terminal under her own power, assisted by the tugs "Svitzer Bentley" and "Svitzer Sarah". On May 8 the ship moored on Southampton anchorage.

Ferry towed to Southampton due to engine problems

On Oct 3, 2013, the "Eurocargo Salerno" suffered engine problems off Selsey Bill being enroute from Antwerp to Lagos. She was assisted to the Nab Anchorage off the Isle of Wight by the Southampton based tug "Svitzer Bentley". From there she was towed to Southampton in the afternoon of Oct 4 by the Solent Towage tug "Apex", which is usually based at Fawley Oil Terminal with the Svitzer Bentley on the stern. The ship eached Portsmouth Anchorage at 1.10 p.m. and berthed at the Railway Terminal around 8 p.m. the ferry was due to stay in Southampton until Oct 7 for repairs.

Cargo ship arrested due to suspicion of toxic waste import

The Nigerian Navy on June 20, 2013, impounded the "Euro Cargo Saleno” which was suspected to be carrying toxic waste. Three crew members, including the captain, were detained by the Navy, other crew members were under close watch at the APM terminal, Tin-Can, Island. The vessel came from Belgium carrying used refrigerators hidden in three trucks. The Nigerian Navy was alerted on the arrival of the vessel from intelligence report from the National Environmental Standard and Regulations Enforcement Agency (NESREA). Based on the information, the Nigerian Navy posted its personnel to be on the lookout for the ship. The vessel was sighted in Nigerian waters on June 19 and was immediately arrested. The vessel would be handed over to Nigerian Maritime Administration and Safety Agency (NIMASA) for further investigation. NIMASA and other relevant government agencies were to search the vessel to determine its actual content. The agency received alert from one of its international collaborators that the seized ship was carrying toxic waste. The importers were aware that the Federal Government banned the importation of used electrical and electronic products into the country.