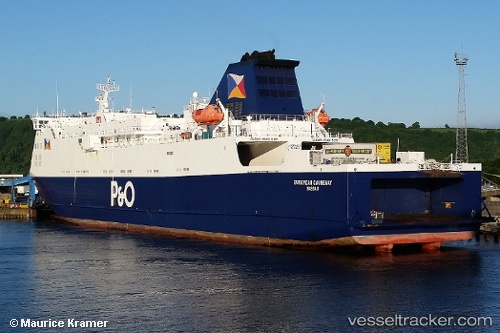 The 'European Causeway' had the worst report of any passenger ferry inspected in the last three years within the ‘Paris MOU’ zone – the trans-Atlantic inspection area to which the UK belongs, in terms of the sheer number of flaws uncovered. There have been over 1,200 such ferry inspections in that time. The detention by the Maritime and Coastguard Agency (MCA) had followed the blanket sacking of an estimated 800 UK seafarers on March 17, and the firm’s effort to replace them with cheaper foreign labour. After the problems were raised and addressed, MCA inspectors released the ship on April 8 a The 'European Causeway' racked up 31 “deficiencies” during its inspection – which began eight days after the mass sackings, and continued up until April 8, when the ship was released from its detention. The next highest was 29 deficiencies, uncovered onboard te Nigerian-flagged ferry 'Jireh' during a check at a UK port in November 2019. Out of the 31 deficiencies found on the 'European Causeway', seven were grave enough to impound the ship. > There were nine deficiencies in fire safety; > Eight fell under the heading “certificate & documentation”, including missing certificates for crew and survival/rescue craft; > Four deficiencies under the heading of “labour conditions”; > Two concerning “life-saving appliances” – specifically that “launching arrangements for survival craft” were “not as required”, and that the “marine evacuation system” was “not properly maintained”; > One deficiency relating to “water/weathertight conditions”; > One concerning “propulsion and auxiliary machinery” including “gauges, thermometers etc” which were “not properly maintained”; > One under “emergency systems”, saying the “muster list” was incomplete; > One under the heading “radio communications” saying there was a “lack of familiarity” with equipment; > One under “structural conditions”, saying “closing devices/watertight doors” were “not as required”; > One marked “safety of navigation”; > One listed as “ISM”; > And one listed just as “other”.

P&O ferry services between Larne and Cairnryan remain suspended on April 9. The update came after the 'European Causeway' was released from detention. It is unclear why the service remains suspended. The company said: “#POLarne #POCairnryan Services remain suspended. It is no longer possible for us to arrange travel via an alternative operator on this route. For essential travel, customers are advised to seek alternatives themselves…” The RMT TScotland warned P&O Ferries it will block ports to disrupt sailings after the company sacked almost 800 workers to show solidarity with the sacked staff. “When they start running the ships of shame, RMT and our comrades and colleagues in the trade union movement and beyond will be at Cairnryan and other ports on a regular basis, blockading the ports. Nothing in, nothing out — that’s what we will be doing to P&O.”

Ferry of company which sacked 800 employees released from detention