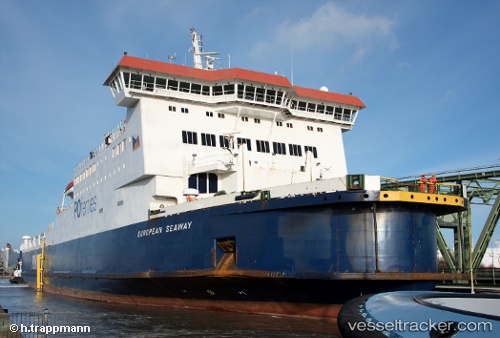 In the night of Aug 25, 2019, the "European Seaway" had a small fire in one of her generator rooms at the Reparation Navale in Dunkirk. The local fire brigade was called to tackle the blaze. There was no information about the amount of damage, but there were no injuries. It now looked, however, looked unlikely that the ferry was to move to the Larne-Cairnyan route next week where she should have released the "European Causeway" for a scheduled dry docking.

The "European Seaways" on Jan 9, 2015, around 11 a.m. broke off its moorings at the Sea Bath Bridge in Cuxhaven in gale force gusts from west. As a precaution, the master had the engine warm and could immediately react. Also a Pilot had already been ordered, but could not board the ship as the gangway had torn off, crashed down and was damaged when the hotel and service ship broke lose. He was then transferred aboard by a pilot boat. For some hours the ship was held on the anchorage off Cuxhaven. A Wulf tug transferred the broken wires back onto the vessel which remained on the anchorage on Jan 10 before being reberthed. Photo: https://www.facebook.com/photo.php?fbid=10203969307208628&set=a.1297209465927.2040189.1101074158&type=1

The "European Seaway" is to become an accommodation vessel for the wind farm industry. The company has converted the roll-on roll-off vessel to serve technicians working offshore in the North Sea. Earlier in May 2012 the ship started a three-month charter with Centrica Renewable Energy Limited after having hull access doors, cranes and boarding ladders installed during a short refit at the Arno shipyard in Dunkerque. Cabins were upgraded and the charterers' managers have been provided with onboard offices. It is the first contract the Dover-based firm has secured in the wind energy market. For the charter period the ship will be anchored seven kilometres off Skegness. Technicians will live on board while undertaking maintenance and operations activities at the Lynn and Inner Dowsing Wind Farm Array. The addition of access doors and specialist boarding and lifting equipment complements the ship's huge vehicle decks, which make ideal storage space for containers, spare parts and equipment for the maintenance of wind turbines and their huge supporting structures. The ship is being supplied to Centrica on a time charter basis, which means she will be manned by P&O deck, technical and catering crew, who will provide hotel services to Centrica staff.