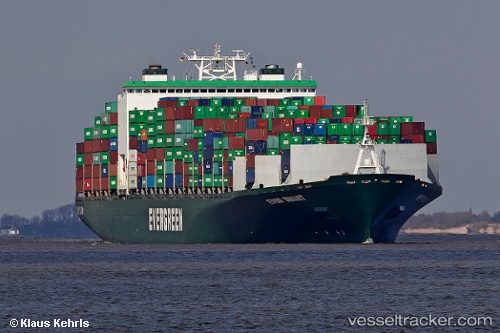 After the collision of the containership 'Ever Smart' with the 'Alexandra 1', which was meanwhile broken up as 'Bass', the company Evergreen Marine has now won a legal wrangle to overturn a liability ruling in the UK's first-ever Supreme Court collision ruling. The Taiwanese operator had previously been found 80% responsible for the collision with the tanker, then sailing as 'Alexandra 1', off Jebel Ali in 2015. The ruling meant that the Admiralty Court will have to reapportion the blame for the incident. The judgment also reinforced the primacy of the "crossing rules" in the International Regulations for Preventing Collisions at Sea 1972, viewed as the principle rules of conduct in navigation. Evergreen was appealing a 2020 ruling in the Court of Appeal that backed up the Admiralty Court's original 80%/20% liability split. The 'Ever Smart' had suffered a damage of $4million in the accident. The 'Alexandra 1', the bow of which was split to beneath the waterline and whose condensate cargo had to be transhipped before a repair could be carried out, had suffered damages of more than $32 million. The case hinged on whether narrow channel rules overrode crossing rules.

The MAIB on July 22, 2020, published its report in the container loss which occurred on Oct 30, 2017, from the 'Ever Smart' while on passage between Taipei, Taiwan and Los Angeles, USA. The vessel’s master had changed the ship’s passage plan to avoid severe weather caused by a developing depression east of Japan. Ever Smart continued in heavy seas; rolling and pitching heavily with frequent bow flare slamming. Once the weather had abated, the crew discovered that the container stacks on the aft most bay had collapsed and toppled to port. Of the 151 containers in the stow, 42 were lost overboard and 34 were damaged. Superficial damage was caused to the ship. In the Maritime Accident Investigation Branch (MAIB) repor safety issues were identified. These are: * The loss of the containers most likely occurred during a period of heavy pitching and hull vibration in the early morning of 30 October 2017. * A combination of factors resulted in a loss of integrity for the whole deck cargo bay; in particular, the containers were not stowed or secured in accordance with the cargo securing manual (CSM). * Container lashings might not have been secured correctly. Stow collapse One point made in the document refers to the initiation of the container stow collapse as indicated here: “Most container stow collapses of this kind occur following the structural failure of an individual container within the stow or the failure of the lashing arrangements. In either case, the containers in the stack directly above the deformed or unsecured container will topple sideways into the adjacent row. This leads to a domino effect as one stack hits another, causing structural or lashing system failure in each adjacent row. This sequence of failure will continue until the outer stack is reached and containers are lost overboard. If the individual weight of any container in a stack exceeds the limit given in the CSM (Cargo Securing Manual), there is a risk that the lashing devices will become overloaded and will fail. Similarly, the risk of containers suffering compression or racking damage lower down in the stowage will also be increased.” The report indicates that the MAIB made three recommendations Nos 2020/125, 2020/126 and 2020/127 to Evergreen Marine Corp. (Taiwan) Ltd to improve standards of stowage plans produced ashore, knowledge of the dangers of bow flare slamming and lashing-gear maintenance management. Partiularly the recommendations highlighted to the company’s ship masters the increased risk of cargo damage when ships experience hull slamming and stern shuddering. during heavy weather. Further, it should introduce a programme for lashing equipment inspections when the ship is not in service; and action should be taken to ensure shore planners are fully trained in the use of ship loading computers and that they understand the importance of checking permissible load limits for containers and lashing systems. Full report: https://assets.publishing.service.gov.uk/media/5f15a2993a6f405c0f80ac37/2020-14-EverSmart-withAnnexes.pdf

On Nov 8 at 10 p.m. the "Ever Smart" berthed at the Seaside Container Terminal in Los Angeles with damage to one bay of containers on her stern. On Oct 30 she lost 42 containers overboard in the Sea of Japan in bad weather, several more stacks toppled over to port, some boxes at port side were crushed underneath. The ship Los Angeles again after the shifted containers were removed, on Nov 13 at 3 a.m., bound to Tacoma, ETA Nov 16. Photo: http://www.shipspotting.com/gallery/photo.php?lid=2766771#