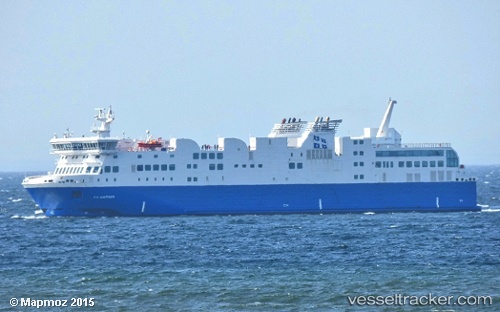 The saga of the 'F.A. Gauthier' probably ended on Jan 26 when the ship was successfully returned to service after repairs that lasted more than a year. Two regular crossings were scheduled from Matane to Baie-Comeau at 2 p.m., then the reverse route at 5 p.m. The air link which had been set up will be maintained until Jan Jan 31 in order to allow customers who have made a reservation to complete their trip as planned. The Société des traversiers du Québec (STQ) has indicated that the costs of the repairs amounted to more than twenty million dollars. The sum included the cost of air crossings and the purchase of the old end-of-life ferry 'ApolloÄ. The cost of purchasing the ferry 'Sareema I' has not been taken into account since it was an STQ project and the ship will now serve permanently in the fleet. The CEO of the STQ indicated that the company was in discussions with General Electric, the manufacturer of the electric motors of the ferry, to determine who will assume the cost of repairs for the last month as to all likelihood, the engines were incorrectly reassembled in the view of STQ which was also exploring the possibility of taking legal action for the costs caused by the initial breakdown of the vessel. The ship, acquired by the STQ at a cost of $ 175 million, had been decommissioned on Dec 18, 2018 due to major construction defect, after less than four years of service. The 'Apollo', acquired at a cost of $ 2.1 million, had only sailed for 21 days before being definitively withdrawn from service due to major structural problems. For several weeks, ships successively followed one another to ensure maritime service and air links were set up. For the past few months, the 'Saaremaa 1' has operated the Matane — Baie-Comeau — Godbout crossing, however, not without trouble either. In September, the 'Saaremaa I' damaged a wharf at Godbout. About a week later, it was docked due to an electronic problem. The 'CTMA Vacancier' also served as a replacement ferry at the end of the year. The 'F.A. Gauthier' left the Davie shipyard in Lévis in December to return to his home port of Matane.

Ferry about to return to service

After 13 months of inactivity, the 'F.-A.-Gauthier' will resume its service between Matane, Baie-Comeau and Godbout in the coming days. The ship headed to sea on Jan 20, 2020, for trials which were going well. On Jan 23, the ship made the round trip Matane-Baie-Comeau. On Jan 24 it sailed between Matane and Godbout. On Jan 23, the preparation of the crew for the operationalization stage started, and the last tests and mechanical adjustments were effected. The captains will also be re-acquainted with the orders and docking in our various infrastructures. There were several safety tests and exercises to do and also everything relating to customer service such as checkouts, computer system, food service, etc. to be tested. Experts from Europe to identify problems with the electric motors who were working for General Electric were still on board the ferry. The 'Le Vacancier', which has actually been acting as a relief vessel, will make its last crossing on Jan 25. The next day, she will leave for his home port of Cap-aux-Meules in the Magdalen Islands. If be F.-A.-Gauthier will not be able to take over service on Jan 26, the state-owned ferry company STQ will bring back the 'Saaremaa', which is currently moored at the port of Trois-Rivières. The service will be offered continuously and without interruption. In addition, the STQ continues to offer air links between the airports of Mont-Joli, Baie-Comeau and Sept-Îles until Jan 31.

Another setback for troubled ferry

The return of the 'F.A. Gauthier' to service between Baie-Comeau, Matane and Godbout which was expected on Dec 20, may be delayed again. On Dec 14 the Société des Traversiers du Québec (STQ) announced that a new problem had been discovered in connection with electric motors. The ship had left the Davie Shipyard in Lévis on Dec 13 to return to its home port of Matane and was due to resume service on Dec 20. During the trip between Lévis and Matane, the crew noted that the engines were not operating according to the manufacturer's parameters. Specialists were dispatched to Matane to precisely identify the problem and repair it on the spot.