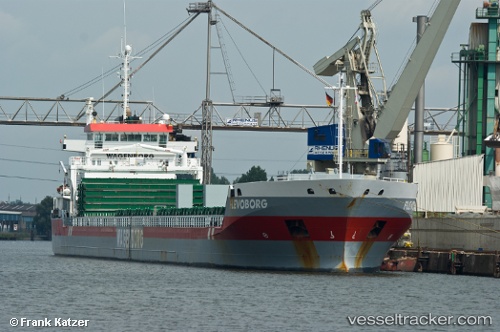 The 'Flevoborg' allided with the buoy ISH upon its departure from section 34 of the port of Montreal, Quebec, on Oct 12, 2019. No damage was reported to the vessel. It continued its voyge from Montreal, where it had sailed at 11.20 a.m., to Torre Annunziata with an ETA as of Oct 29.

On June 21, 2017, the "Flevoborg" ran aground on the St. Lawrence River in front of Sainte-Croix in Lotbinière on the south side of the fairway. The ship was coming from Montreal, where it had sailed at 7.15 a.m. carrying a cargo of maize, and was heading eastwards bound to Warrenpoint, when the engines failed and it got stuck. The vessel did not interfere with passing ship traffic. With the help of tugs, the rising tide and pumping water from the ballasts tanks, the ship managed to refloat by itself in the early evening. As the engines were still not working, the "Flevoborg" was towed to Quebec for repairs, where it berthed around 11.30 p.m. French reports with photos: http://ici.radio-canada.ca/nouvelle/1041030/navire-echoue-fleuve-saint-laurent-lotbiniere-remorquage-flevoborg http://www.sympatico.ca/actualites/nouvelles/regions/quebec/le-navire-flevoborg-remorque-jusqu-au-port-de-quebec-apres-s-etre-echoue-1.2711060