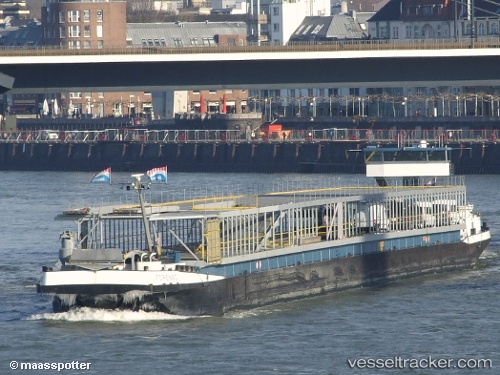 After the heavy collision of the Swiss flagged river cruise ship "Edelweiss" (MMSI: 269057441), with the loaded "Forenso", 1285 ts (EU-No.: 02324437;), on the Waal at the railroad bridge near Nijmegen on March 20 at 4 a.m., the "Forenso" could leave the Waalkade in Nijmegen after the removal of twisted debris from its bow at 6.10 p.m. It resumed the voyage to Colonia where it was due to arrive o March 21. The "Edelweiss" remained at the emergency berth in the Weurt West Canal where the baggage of those passengers who intended to continue the cruise westward was transferred from the heavily damaged "Edelweiss" onto the Swiss river cruise ship "Oscar Wilde" (MMSI: 269057612) which sailed at 11 p.m. towards Amsterdam, where it arrived on March 21. 12 passengers who wanted to abort the cruise were carried on by coaches. The police of Nijmegen continued its investigation which was expected to be finished within around two months.

the Swiss flagged river cruise ship "Edelweiss" (MMSI: 269057441), was collision with the "Forenso", 1285 ts (EU-No.: 02324437), on the Waal at the railroad bridge near Nijmegen on March 20, 2019, at 4 a.m. After the accident a fire broke out on the "Edelweiss" which could later be extinguished. Emergency services, the fire brigade and ambulance, a police boat and a Rijkswaterstaat boat were on site. The "Forenso" which was damaged at the bow was taken to a quay in Nijmegen. The vessel had been underway from Flushing to Germany. The 160 passengers of the "Edelweiss", which was underway from Colonia to Amsterdam at the time of the accident, were mustered and assembled at the reception in the dark .There was no panic at all. The crew of 42 got blankets for people who were cold. Then they were taken off by boats of Rijkswaterstaat which was completed at 6 a.m. Attempts were being made to arrange reception for the startled passengers. They were collected in the Nijmegen town hall. Another shipping company offered to transport them further. Because one of the ships allided with a pillar of the railway bridge, train traffic between Nijmegen and Arnhem was stopped as a precaution. At 6.45 a.m. the train traffic started again after inspections were carried out. Ship traffic on the Waal could continue as usual. The river cruise ship, which was breached at port side, previously had encountered problems with one of the propellers after previously hitting a log. The ship could therefore only run on one engine. It had been planned that problem was to be resolved in Papendrecht. Salvors started the recovery of the "Edelweiss" around 10 a.m. The ship was towed to the port of Nijmegen. The tug "Liberté" (MMSI: 244690320) took the ship in tow to the Weurt West Canal where it was berthed at 11.15 a.m. Reports with photos and video: https://www.omroepgelderland.nl/nieuws/2402359/Passagiersschip-en-vrachtschip-botsen-op-de-Waal-160-passagiers-van-boord-gehaald https://www.nrz.de/staedte/kleve-und-umland/bei-nimwegen-stossen-passagierschiff-und-frachter-zusammen-id216705579.html https://www.gelderlander.nl/nijmegen/frontale-botsing-op-de-waal-bij-lent-160-passagiers-veilig-aan-wal~a1293894/ https://nos.nl/artikel/2276775-passagiersschip-naar-haven-nijmegen-gesleept-na-botsing-op-de-waal.html https://www.rtlnieuws.nl/nieuws/nederland/artikel/4648401/frontale-botsing-cruiseschip-en-vrachtschip-op-waal https://www.omroepgelderland.nl/nieuws/2402364/Botsing-op-Waal-rederij-stuurt-ander-schip-om-passagiers-op-te-pikken https://www.gelrenieuws.nl/2019/03/passagiersschip-en-vrachtschip-botsen-op-de-waal-bij-nijmegen.html https://www.nu.nl/binnenland/5799813/passagiers-cruiseschip-op-waal-geevacueerd-na-botsing-met-vrachtschip.html?redirect=1 https://binnenvaartlog.nl/passagiersschip-en-vrachtschip-botsen-op-de-waal-160-passagiers-van-boord-gehaald-fotos/ https://www.rijkswaterstaat.nl/nieuws/2019/03/rol-officier-van-dienst-en-rijkswaterstaat-tijdens-botsing-op-de-waal.aspx