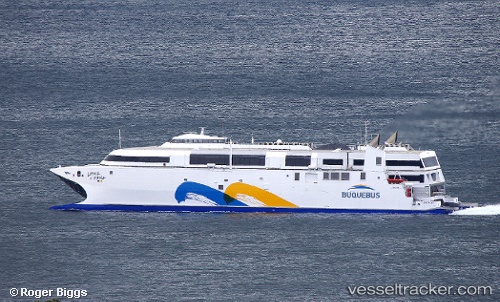 Incat’s fastest ferry yet, the LNG-fuelled gas turbine-powered ‘Francisco’ has successfully entered service with Buquebus in South America. Heralding a new stage in the development of high-speed ferry transportation, Buenos Aires-based Buquebus has introduced an exceptionally fast vessel to the Argentina/Uruguay travel market. Putting the Buenos Aires/Montevideo ferry service on a stronger footing to compete with airline operators, the 99m catamaran Francisco can maintain schedules at 50 knots-plus with a full payload of over 1,000 passengers and 150 cars. The vessel has a lightship speed in excess of 58 knots.

On Oct. 1 in Buenos Aires the President of Argentina, Christina Fernandez de Kirchner became the “Godmother” to a vessel built in Australia. Named Francisco in honour of the Argentine born Pope, the 99 metre World’s Fastest Ship, and the first large dual fuel high speed Ro-Ro to use LNG as its primary fuel, was built in Hobart by Incat Tasmania Pty Ltd and delivered recently to South American company Buquebus. The Argentinian President was joined by the President of Uruguay Jose Mujica, at the glittering ceremony in Buenos Aires, with both Presidents jointly cutting the ribbon at around 8pm Monday evening Argentina time in front of 1500 invited VIP guests. The ship, Francisco, commences service tomorrow on the River Plate (Rio Plato) between Buenos Aires and Montevideo. Francisco has capacity for 1,000 persons and 150 cars. A luxurious fit out has been incorporated, including an enormous 1,100 square metre duty-free shop and passenger accommodation for economy, tourist, business, and first class plus an exclusive VIP lounge. Australian ferry builder Incat Tasmania’s world first high speed dual-fuel vehicle and passenger ferry is the world’s fastest ship having achieved a lightship speed of 58.1 knots - (107.6 kilometres an hour).

WORK is nearly complete on Bob Clifford's newest vessel, Lopez Mena -- a world-first, high-speed passenger ferry which will be powered by liquefied natural gas. It is estimated that the vessel will cost about $80-$90 million by completion and it is set to revolutionise the future of Incat, which employs about 250 Tasmanians. The 99m Lopez Mena is different to previous boats built at the Dowsing Point marina for two reasons: its fuel source and its luxurious fit-out. The vessel will be powered by GE LM2500 gas turbine engines. It is the first time LNG powered dual-fuel engines have been used in an Incat high-speed ferry, and the first high-speed craft in the world built under the HSC code to be powered by gas turbines using LNG as the primary fuel and marine distillate for standby and ancillary use. The ferry will be operated by the company Buquebus on its River Plate service in South America. http://www.themercury.com.au/article/2012/12/20/368717_most-popular-stories.html