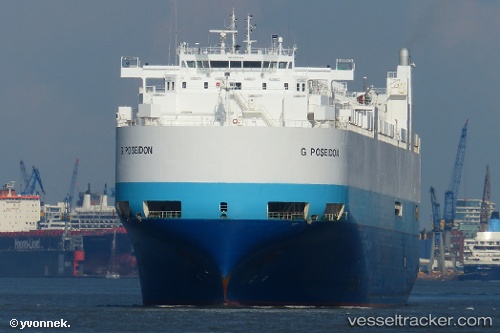 Another car carrier is stranded in Southampton water

Whilst all eyes have been on the Hoegh Osaka another ship has been left stranded in Southampton water. G Poseidon, another roll on roll off vehicle carrier, has been stuck at Southampton docks for a week due to a hole in its hull. According to a source at the docks it came into difficulties in rough seas and some of its cargo broke free causing the damage. But the 72,408 ton ship which was built in 2011 for South Korean ship management firm Doriko, made it back into port at 7am last Friday where the damage is now being assessed for repairs. The source said: “It had some cargo shift on board but some high heavy cargo broke free when it was in some rough seas and caused some damage. It's being assessed for repairs at the moment.” The last port the 232m long ship was recorded at was in Durban in South Africa but it is unclear that this was where it was travelling from when it was damaged. http://www.dailyecho.co.uk/news/11744455.Another_ship_is_stranded_in_Southampton_water/

The Courts ordered two ships by shipping companies registered in Panama to pay substantial sums to local companies, a bank and sailors. One ship was ordered to pay €617,279 to a bank and four local oil suppliers, whilst another had to pay €43,152 to 22 sailors. The first case was brought before the Courts by Dr Ann Fenech, representing Macquire Bank Limited, Salvo Grima & Sons Limited, San Lucian Oil Company Limited, Island Bunker Oils Limited and Cassar Petroleum Services Limited against the Ship called “A LADYBUG”, owned by the company; ‘A Ladybug Corporation’. The bank asked to be paid €70,362 for unpaid work done by 12 seamen aboard the vessel, which the bank had forked out. Macquire Bank Ltd also paid a sum of €123,435 to the Transport Authority, €74,950 for the ship to anchor in Malta and €48,485 for the provision of ‘emergency bunker fuel’. The four local companies also requested payment for fuel and water supplied to the ship. Following the company’s failure to react to the request for payment by the other companies, Judge Mark Chetcuti ordered it to pay the requested sum. Meanwhile, Judge Anthony Ellul ordered a vessel belonging to another company of the same parent corporation, to pay the sum of € 43,152 to 22 sailor who were not paid for services they provided. International Transport Workers’ Federation’s Paul Falzon opened this case against the ship called “B LADYBUG” and told the Courts that although the company had agreed to certain settlements equivalent to € 43,152, had not yet paid. After the company failed to respond to the request within the specified time limit, Judge Anthony Ellul granted the request of the crew and ordered the company to pay the requested sum. Source: Malta Independent