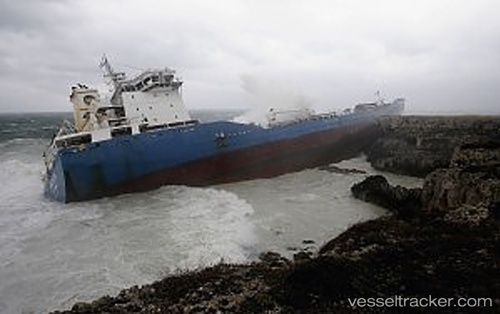 Five months after it ran aground off the cliffs of Santa Panagia close to the ISAB refinery tanks, the vessel is still lying on the rocks. For tourists and passers the wreck has now become an attraction. Nero de Lovorno and the local company Augustea have been awarded the contract for its removal. The two companies have already presented a salvage plan. A chain system would be used from a floating platform to cut the wreck down on the spot. The risky operation could cause considerable damage to the environment and pose a risk to the inhabitants of the neighboring district Mazzarrona. Within 1,5 months after the grounding 378.4 cubic meters fuel had already been recovered by the company Smit Salvage of Rotterdam. At the moment, for security reasons and protection of public safety, within half a mile from the wreck transit, anchoring, fishing activities are prohibitied, but many boaters close in on the wreck in order to take some pictures The salvage project is now being considered by all responsible public authorities of the Port Arpa and the Asp Province and the Ministry of Environment. The approval process is expected to take about a month and a half. Italian report with photo and video: http://ctzen.it/2012/08/22/augusta-relitto-della-gelso-m-ancora-in-marerecupero-rischioso-per-ambiente-e-cittadini/

The defueling operations were completed successfully on Mar 28, 2012, two weeks after the work started. On the whole 387.14 cubic meters oil were pumped off the wreck and an environmental disaster thus averted. Defuelling operations were carried out by Smit Rotterdam and Italian Augustea. The oil and diesel was transferred onto the tug "Carlo Magno" of Augustea and a barge. The next step will to call for tenders for wreck removal.

The fuel recovery of the "Gelso M" suffered delays as the oil was too thick to be pumped. 35 tons of fuel have been recovered so far. Now a more powerful pump is needed. Meanwhile, the causes of the incident were revealed after opening the voyage data recorder of the ship. According to the Captain of the Port of Syracuse, the propeller of the ship turned too fast, causing the automatic blocking of the engine so that the tanker went adrift in wave heights of 8-9 metres.