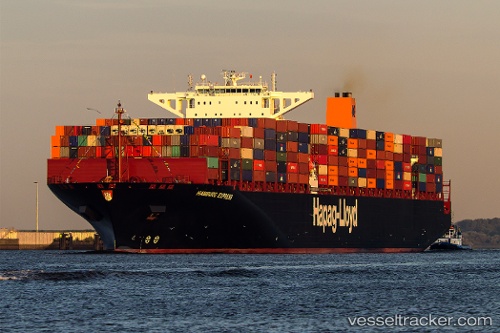 On July 4, 2016, the crew of the “Hamburg Express” saved the crew of two of a small yacht off Taiwan. They were underway from Hongkong to Taiwan and had no food or beverage since three days. When they issued a Mayday call in severe seas, the "Hamburg Express“ was nearby and diverted to the yacht. About two hours later the second officer remarked the yacht which was wallowing under sail in swells of 2,5 meters height. The container ship manoevered alongside and took on board both castaways. The boat was let adrift, and the Coastguard was informed accordingly. At 10 p.m. the ship berthed in Kaohsiung where the sailors were handed over to the authorities. German report with photo: http://www.schiffsjournal.de/hapag-lloyd-hamburg-express-rettet-zwei-segler-aus-seenot/

On Aug 15, 2012, the "Hamburg Express" entered its homeport Hamburg for the first time. On Aug 17 Cornelia Behrendt, the wife of the Hapag-Lloyd-director Michael Behrendt, christened the new flagship of the company at the HHLA-Terminal Altenwerder. The "Hamburg Express" is the biggest ship of the Hapag-Lloyd fleet now. German reports with photos: http://www.freiepresse.de/NACHRICHTEN/WIRTSCHAFT-BOERSE/Groesster-deutscher-Containerfrachter-in-Hamburg-getauft-artikel8071480.php http://www.welt.de/newsticker/news3/article108668206/Einmal-volltanken-acht-Millionen-Dollar.html

Hamburg Express to be christened on August, 17 2012 in Hamburg-Altenwerder

Hapag-Lloyd's newest vessel was delivered on July 5, and will arrive in Hamburg on the day before the christening ceremony. Godmother of the ship, will be the wife of Hapag-Lloyd CEO Michael Behrendt, Cornelia Behrendt. The naming ceremony will take place at the container terminal Altenwerder, Mayor Olaf Scholz is also invited as managers of large corporations in the country. Hamburg Express is the first of a series of ten ships with space for 13,200 containers. The ten Hapag-giants will all fly the German flag.