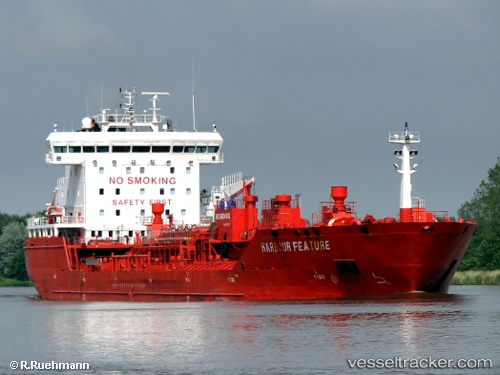 The "Harbour Feature", en route from Rotterdam to Montreal, whilst transiting the English Channel, made a controlled stop of its main engine in the late evening of June 9, 2018. The vessel has left the south-bound TSS to anchor and effect repairs, and dropped anchor three miles southeast of Dover Harbour to conduct a repair of the main engine which had experienced a water leak into No.3 cylinder, going in by the fuel injector in position 51 04 23.4N, 001 23 57.6E. Prior to the controlled stop the Dover Coastguard and VTS were asked for authorization. Owners, charterers and other relevant parties were kept informed. The repairs were successfully completed within five hours and following proper testing the vessel proceeded on its voyage to Montreal on June 10 at 3 a.m. The managers emphasized that no malfunction of the steering gear, propulsion and machinery systems occurred and at no time there was a safety risk for crew, vessel or nearby traffic. On completion of investigation into the occurrence, they will provide full details into the cause of the incident and what remedial action is undertaken. The vessel is carrying 12,403 tons of IMO Class 3 UN 1202 cargo along with 372 tons bunkers fuel.

The states of New Hampshire and Maine recouped the 1.3 million dollar they spent to repair the Sarah Mildred Long Bridge after the "Harbour Feature" hit it on Apr 1, 2013, officials said on Mar 26, 2014. The tanker broke its mooring lines at the New Hampshire State Pier in Portsmouth and struck the bridge, which spans Portsmouth and Kittery, Maine. The two states sued the tanker under maritime law, and also required a 2.4 million dollar bond be posted to cover estimated costs and a 50 percent contingency. It was believed the tanker's insurance company would pay the 1.3 million dollar repair cost. The federal lawsuit the two states filed in Concord didn't request a specific damage amount at the time. The tanker's management company, the TB Ship Management in Hamburg answered the lawsuit. John Bass, a Portland, Maine, was appointed as attorney representing the companies interests. The lawsuit was meant to reimburse the two states, which split the bridge's costs equally. The lawsuit, scheduled for trial Oct. 7, was dismissed on Mar 24.

A legal dispute over who should pay for $2.4 million in damage to the Sarah Mildred Long Bridge and an estimated $1.5 million in damage to a tanker ship that struck the bridge, is scheduled to go to trial on Oct. 7, 2014. The trial date, and a series of related deadlines for the U.S. District Court of New Hampshire case, were announced by the federal court Monday. In dispute is whether fault for the incident — when Portuguese tanker MV Harbour Feature struck and damaged the bridge on April 1 — lies with the tanker, or the states of Maine and New Hampshire, which own and/or manage the bridge and nearby port. More at http://www.seacoastonline.com/apps/pbcs.dll/article?AID=/20130716/NEWS/307160398/-1/NEWSMAP