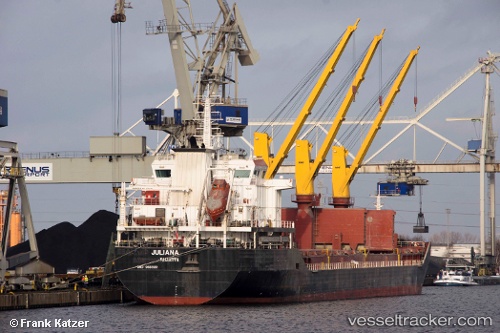 The 'Harvest Spirit', en route to Quebec City, suffered major gear problems on July 2, 2021. The vessel had to proceed to the emergency anchorage near the Contrecoeur wharf. It was to be towed or escorted to Montreal by a Groupe Ocean tug for inspections and repairs in section 44. It remained at anchor as of July 6.

The 'Harvest Spirit' which ran aground early on Dec 2 in the Detroit River near Grosse Ile has finally been refloated by the tugs 'George F. Bailey', 'Wyoming' and 'Nebraska' and was moved out of the shipping channel on Dec 3 about 7 p.m. Shortly before 9 p.m., the freighter was in the waters of Lake Erie and dropped anchor at 9 p.m. in position 41° 57.54' N 083° 4.51' W in U.S. waters, awaiting a thorough inspection. No one was injured. and there were no indications of leakage or pollution from the ship, which was loaded with approximately 10,000 metric tons of furnace coke and 74,000 gallons of diesel fuel. Meanwhile, the Livingstone Channel in the lower Detroit River, where the freighter ran aground, remained closed pending completion of a Corps of Engineers first light survey to ensure sufficient water depth for traffic to resume. Report with photo: https://eu.detroitnews.com/story/news/local/wayne-county/2020/12/03/freighter-stable-officials-say-efforts-continue-free-detroit-river/3808097001/

Efforts to free the 'Harvest Spirit' on the Detroit River were expanding on Dec 3, while costs grew for those waiting to get around the ship and continue through the Great Lakes. The Canadian authorities continued to monitor the scene as various efforts were made by Coast Guards in both countries and the owner company. The vessel was stable, with no reports of pollution or water intake. Transport Canada was conducting a National Aerial Surveillance Program pollution detection overflight to ensure there was no pollution in the affected areas. The U.S. Coast Guard stated there were 13 vessels waiting to move through the channel. The industry trade group Lake Carriers Association was also keeping a close eye on the situation. Based in Westlake, Ohio, the association represents U.S.-flagged vessel operators on the Great Lakes. the 'Harvest Spirit's predicament immediately had a giant financial impact on the region's shipping industry. Vessels stacked up in Lake Huron about Port Huron and in the Detroit River down by Detroit. It was estimated that it costs $3,000 to $5,000 per hour for a 1,000-foot freighter to sit idle. The traffic jam was worrisome because the shipping season and sailing from Lake Superior to the lower lakes will end on Jan. 15 with the closure of the Soo Locks and won't start up again until March 25. Any impact cuts into the nine-month season. The vessel's owner, McKeil Marine, has submitted and got approval for a salvage plan. The vessel will begin ballasting its tanks following successful engine test results. Two tugs from the Great Lakes Towing, the 'Manitou' and the 'Clyde S. Vanenkevort', were assisting. The freighter has a U.S. Environmental Response Plan in place to mitigate pollution, according to the Coast Guard, and once the Harvest Spirit is refloated, the Army Corps of Engineers will survey the Livingstone Channel. Additional personnel and assets from both the Canadian and United States Coast Guards were on standby in the immediate area, if needed. The ship was carrying about 74,000 gallons of diesel fuel and a cargo of 9,000-10,000 metric tons of furnace coke. On Dec 2 the 'Harvest Spirit' made her first visit to Detroit and loaded the coke on Zug Island. Aftershe ran aground, the Canadian Coast Guard's Marine Communications and Traffic Services in Sarnia directed vessels on the river to only travel through the shallower Amherstburg Channel, if operators felt it was safe. Canadian authorities will clear vessels that wanted to use travel through the area on a case-by-case basis. Report with photos: https://eu.detroitnews.com/story/news/local/wayne-county/2020/12/03/freighter-stable-officials-say-efforts-continue-free-detroit-river/3808097001/