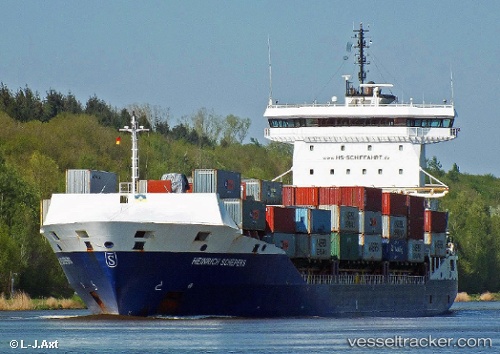 Coming from Liverpool, where she had sailed on July 27, 2018, at 4.40 a.m., the "Heinrich Schepers" allided with the Deurganck Dock in Antwerp on July 29. It contacted with the metal current deflecting wall north of the entrance of the dock. of the Deurganck dock which was installed there to reduce the amount of silting up. The damage to the wall was minor. The ship was initially investigated in the Deurganck dock and docked at the Antwerp Shiprepair on July 30 at 4.50 a.m. She sailed again on Aug 7 at 11.30 p.m., next being bound to Bilbao, ETA Aug 10. Dutch report with photo: https://www.hln.be/regio/beveren/schip-botst-op-slibmuur-deurganckdok~a209f34e/

On July 18, 2017, at 1.20 p.m. the "Heinrich Schepers" suffered engine damage during the transit of the Kiel Canal from Hamburg to Kotka at canal km 28 short before the Grünental Bridge. The ship veered off course and ran into the embankment on the Northern canal side. An emergency anchoring manoever reduced the impact, but the ship came to rest perpendicular to the fairway, so that no ship traffic could pass the grounding site. The canal was barred for shipping in the Dükerswisch/Fischerhütte area. At 2.15 p.m. the crew managed to get the engine running again, and the "Heinrich Schepers" was able to pull herself out of the embankment and proceed Eastward towards Fischerhütte where the vessel waited for the arrival of the police. After initial investigations the ship was allowed to continue to Kiel where it berthed at 9.30 p.m. After surveys it left the port on July 19 at 3 a.m., ETA Kotka July 22, 4 a.m. German report and photos: http://www.boyens-medien.de/artikel/dithmarschen/maschinenausfall-schiff-legt-sich-im-kanal-quer.html http://www.kn-online.de/News/Nachrichten-vom-NOK/Containerfrachter https://scontent-frt3-2.xx.fbcdn.net/v/t1.0-0/q81/s480x480/20108662_1698355010194636_6420060025441702976_n.jpg?oh=5dfdcdbcb29f37b7cb518415a4d2a0af&oe=59F26BDA

The "Heinrich Schepers" ran aground on May 21, 2016, at midday on the Morskoy Canal while leaving the port of St. Petersburg after having suffered propulsion failure. The vessel was refloated an hour later with the help of tugs and taken back to port for surveys. The ship resumed the voyage in the evening, being bound for Bremerhaven, ETA May 24, 10 p.m.