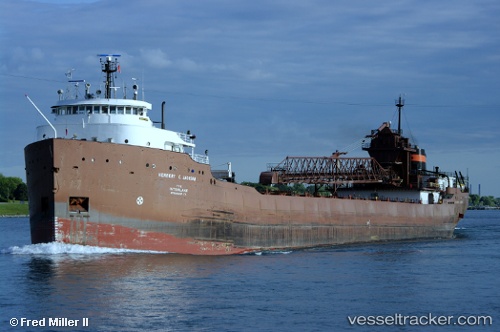 The "Herbert C. Jackson" was damaged by an ice floe on April 8, 2019, in Sault Ste Marie was called around noon. The freighter was traveling in Munuscong Lake when the ice floe hit the port side of the ship and caused a 10-12 foot fracture above the water line. The U.S. Coast Guard was called to assist. The ship was tied down in Soo Harbor, east of the Soo Locks throughout much of the day on April 9. It headed to Superior, Wisconsin, to be repaired, and on April 10 it arrived in Duluth. Reports with photos: https://www.9and10news.com/2019/04/08/jackson-freighter-out-of-service-after-ice-plates-crash-into-hull/ https://upnorthlive.com/news/local/great-lakes-freighter-damaged-by-sheet-of-ice

The Superior Fire Department responded to a fire on the "Herbert C. Jackson" at the Fraser Shipyard in Duluth on June 7, 2016. Upon arrival firefighters found smoke coming from several areas of the aft end of the ship which has been in dry dock while undergoing repowering. It was verified that all workers were accounted for. Due to poor visibility, extremely high heat and difficult access to the area of origin, it took fire crews more than 1½ hours to get the fire under control and extinguished. The fire department responded with three engines and a heavy rescue with a total of nine firefighters and a battalion chief. Lake Assault Boats, a company of Fraser, provided a water supply with a fire boat that was going to be delivered to New York on June 10 and was going through some of its final testing at the time of the fire. The Coast Guard also responded to ensure there was no environmental run off issues. All crews cleared the scene at three hours later. Welding and torch work being done in the area appeared to be the cause of the fire. Report with photo: http://www.superiortelegram.com/news/superior/4049652-sfd-responds-ship-fire

The Interlake Steamship Company’s last steamship arrives at Fraser Shipyards for repowering The S.S. Herbert C. Jackson made its final journey as a steamship this month when it sailed into Fraser Shipyards in Superior, Wis., where it will undergo a six-month conversion to a highly automated diesel propulsion system. As the last steam-powered ship in Interlake Steamship Company’s fleet, the Jackson is the fifth ship to undergo a major overhaul and its fourth steam-to-diesel conversion since 2006. This conversion represents the final phase of the company’s 10-year, $100 million modernization effort. Regularly carrying almost 25,000 tons of iron ore between Marquette and Detroit, Mich., the 690-foot Jackson was powered by an aging steam turbine and two boilers, which have operated since the ship was built in 1959. Maintenance burdens and new emission requirements fueled Interlake’s decision to repower the ship. http://www.marinelink.com/news/interlake-steamship402560.aspx