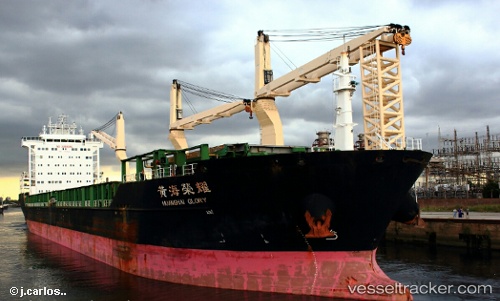 The 'Huanghai Glory' with 23 Chinese crew members on board was attacked and boarded by pirates on March 5, 2020, at 6.20 p.m. aboout 85 miles south of Lagos in position 05 01.8N 003 27.6 in the Gulf of Guinea. The ship was drifting after the attack, not responding to contact requests. The Nigerian Navy patrol boat NNS 'Sparrow' was approaching the vessel nearly 24 hours after the initial alert in the vicinity of Lagos.

German Heavy lift specialist Rickmers-Linie is launching a westbound round the world service connecting Asia, South America and North America. The multi purpose heavy lift vessel Huanghai Glory will launch the service; the 2012 built, 28,300 dwt ship has a lifting capacity of 160 tonnes and is expected to be joined on the route by another vessel in May 2013. On her first voyage for the service, Huanghai Glory is scheduled to call at Bayuquan, Xingang, Dalian, Shanghai, Kaohsiung, Punta Quilla, Buenos Aires, Montevideo, Santos, Rio de Janeiro, Vitoria and Suape.