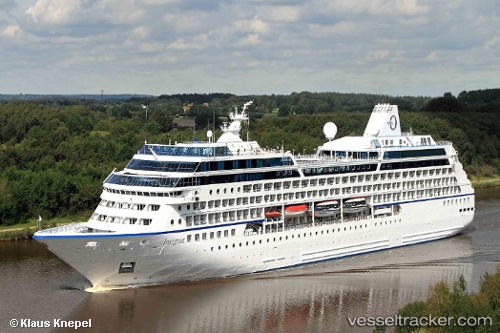 After leaving Bermuda, the 'Insignia' encountered a sailing vessel which was suspected to be abandoned approximately 50 miles off Bermuda on July, 10 at 6:25 p.m. 50 miles North North West of Bermuda. The vessel showed signs of damage and the sails were poorly set, the name s/y 'Uplace' (MMSI: 211795350) was broadcast on AIS. The passing m/v 'Genoa' was tasked with investigating the 'Uplace' further to establish if there is anyone onboard. Further research found the 36 ft German registered sailing vessel had been reported on a few occasions since the crew abandoned to a U.S Coast Guard helicopter in April. A Notice to Mariners was issued regarding the floating hazard.

The "Insignia", originally bound for Bermuda, has docked in Maine to avoid the oncoming Hurricane Florence due to make landfall this week. The vessel docked on Sep 10, 2018, after being forced to change course due to the hurricane. City officials expected more cruise ships to dock this week as Hurricane Florence makes its way toward the eastern U.S. coastline.

Oceania Cruises announced a major investment in modernizing its fleet. The company unveiled a multiyear project called OceaniaNEXT, which will ultimately touch all aspects of the line's upscale cruise experience -- its ships, emphasis on cuisine and fine dining, and destination focus. Oceania's 684-passenger Insignia will be the first ship to go under the knife, emerging with its new look December 7, 2018. Its nearly identical R-class sisters will get their makeovers over the next two years: Sirena in May 2019, Regatta in September 2019 and Nautica in June 2020.