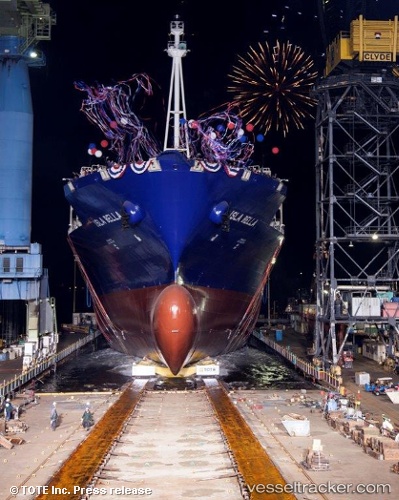 JACKSONVILLE, Fla., -- As Hurricane Mathew brews in the Caribbean, TOTE Maritime officials say they plan to continue their cargo schedule. Tote is the owner of the doomed El Faro cargo ship that sank last year during Hurricane Joaquin, killing 33 crew members. However, business is not stopping for TOTE Maritime along their Jacksonville to Puerto Rico route. Tuesday, a TOTE ship will leave Jacksonville for Puerto Rico and another will leave San Jaun for Jacksonville. The ship that replaced the El Faro is the Isla Bella, considered one of the best in the market. Its a new ship that is run by natural gas. First Coast News Meteorologist Tim Deagan says this week, the water along the cargo shipping route can get as high as 40 feet. "I cannot imagine a more serious situation. This hurricane is more intense than Joaquin. It is larger than Joaquin." http://www.firstcoastnews.com/news/tote-ships-to-sail-during-hurricane-mathew/328767155

TOTE Inc. on Jan. 12, 2016 announced that TOTE Maritime Puerto Rico successfully bunkered ISLA BELLA, the world's first liquefied natural gas (LNG) powered containership, with LNG at the Port of Jacksonville in Florida, U.S. — the first successful LNG bunkering operation to occur at the port. Approximately 100,000 gallons of LNG were loaded during the bunkering operation, which is said to have been transported by 12 TOTE-owned LNG ISO containers.TOTE says the bunkering occurred under strict U.S. Coast Guard oversight and alongside Isla Bella's cargo operations.“We are very pleased with the results of this initial LNG bunker event and know that the use of LNG in our Marlin Class vessels will provide unprecedented environmental benefits both here in Jacksonville and in Puerto Rico,” said Tim Nolan, President of TOTE Maritime Puerto Rico."Our sister company, TSI (TOTE Services, Inc.), has developed significant expertise in LNG as a Maritime fuel and ensures that our vessels operate safely and efficiently using this environmentally superior fuel."The LNG loaded to the Isla Bella is said to have been sourced from AGL Resources’ LNG production facility in Macon, Georgia by JAX LNG, LLC, a TOTE partner.In September, 150 Port of Jacksonville area stakeholders received training on LNG bunkering awareness and safety in an event supported by TOTE and other industry players. In November, it was reported that Clean Energy Fuels Corp (Clean Energy) said it "participated in a little history" by providing LNG bunkering services to TOTE's newly delivered Isla Bella. Source: Ship & Bunker News Team