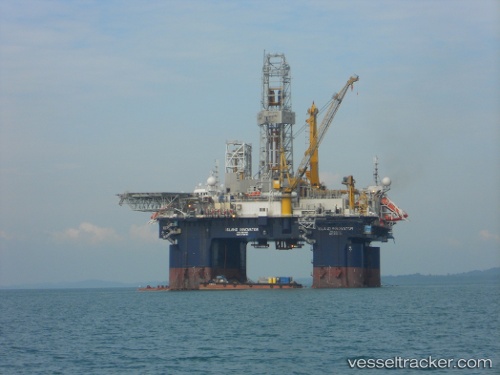 Norway’s Island Drilling has been awarded a contract by Faroe Petroleum Norge for the utilisation of 2012-built semi-submersible rig Island Innovator. Drilling is scheduled to commence in in the third quarter of 2019, for one well at the PL888 Canela license, located west of the Heidrun field.

Rig getting stabilized throughout the day

By noon the leakage aboard the "Island Innovator" which occurered during maintenance work at the plant to Odfjell Drilling Hanøytangen outside Bergen was still not finished. The rig tilted less than it did before, but work was to continue throughout the day. Both a tug and an anchor handling vessel from Farstad Shipping stabilized the rig while working. Odfjell worked to replace a valve at the seawater inlet of the rig. The work took place both above and below the sea surface when a leak arose in a pipe which was was sealed with two plugs. After a few hours the leak was sealed and Odfjell work began to empty the rig for water, thus stabilizing it. The reason why the plugs failed was not known. Report with photo: http://www.smp.no/nyheter/article7668347.ece

The "Island Innovator" began taking on water in the morning of May 31, 2013. 67 men were evacutedd at Hanøytangen in Askøy, Hordaland at 4.30 a.m. One person was slightly injured. The 37 persons still aboard were able to get situation under control, but the platform was not yet stabilised. The leak which had occurred during the work of divers on the platform was almost plugged by 6 a.m. Divers were sent to patch the leak in a pipe. While the platform was still taking in water in a tank, bilge pumps were able to cope with the flooding. The semisubmersible rig was tilting three to four degrees towards land. It can withstand up to 17 degrees. The chains holding the platform in place, however, were under considerable strain. Odfjell Drilling, who operate the rig, have obtained anchor handling vessels to assist reducing the load. Ballast tanks were used to stabilize the rig. A supply vessel was on standby in case the rig was tilting more. Booms were being placed in the water at around 5.30 a.m. Firefighters, a fire boat with divers, police patrols, fire trucks, ambulances and a rescue boat were on the spot too. Norwegian reports with photos and video: http://www.ba.no/nyheter/article6684069.ece http://www.nrk.no/hordaland/63-personar-evakuert-1.11054817 http://www.bt.no/nyheter/lokalt/Plattform-tar-inn-vann--2906797.html#.UagvIkD0HZk