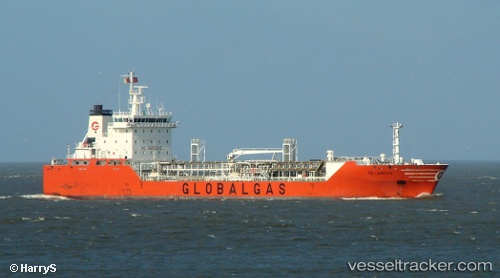 After spending months trapped on board the abandoned 'Celanova', the Cuban crew was stuck in a Manila hotel waiting to get repatriated, being now delayed by closed borders caused by the Covid-19 pandemic. In Dec 2019, the 'Celanova' lost its rudder off the Philippines and was towed to Manila Bay, where she dropped anchor 13 miles from Manila's port, awaiting repairs for which the owner was unable to pay, as the ship had no hull and machinery cover. Globalgas has been trying to sell the vessel to pay off outstanding debts but was blocked from doing so by banks. The company later filed for insolvency. The two Spanish and 13 Cuban crew members were left stranded on the vessel, being unpaid, and with food, water and bunker fuel running low. The local authorities did not want the vessel to move closer to the port because they feared the cargo presented a safety risk. The ship's protection and indemnity provider, the American Club, became aware of the termination of class later that month. At the same time, the club found out that, unbeknown to it, the 'Celanova' had called in Iran and was carrying a cargo that was in contravention of US sanctions and the club's rules. An American Club chairman and chief executive stated that because his company is US-based, once the origin of the cargo was confirmed, P&I cover was terminated. Up until that point, it was the American Club that incurred the expense of towing the rudderless vessel to safety outside of Manila, Philippines, arranging for repairs to the vessel's generators, and providing other assistance to the master and crew. Following the discovery of carriage of the illicit cargo, and for the safety of life and property, the club applied for and obtained permission from the US Department of Treasury to continue to assist the vessel and crew. Unfortunately, the permission was conditioned on the cargo remaining on board. The problem for the American Club was that in March, the cargo was transhipped onto another vessel for onward delivery to China. Luz Baz, the International Transport Workers? Federation (ITF) coordinator for Spain, who became involved in the case in February, claimed that the crew had no option but to tranship the cargo. The crew's priority was to make sure that the cargo was unloaded or transhipped to avoid the enormous risk to their lives. At that time, the ship did not have enough bunkers to run the generator to cool the dangerous cargo which created an obstacle in the American Club's efforts to provide the crew with further assistance. After several more months of the crew living in limbo on a dead ship, and often relying on hand-outs from local charities and the Philippine Coast Guard, the American Club was able to resolve the situation for humanitarian reasons. Pursuant to special permission, the club was allowed to provide necessary supplies and other services to the crew. With full cooperation of the ITF, the club paid the crew four months of wages and arranged for their repatriation. The club did face delays with the repatriation of the Cuban crew members due to restrictions in place in Europe and Cuba. However, the vessel remains under detention off Manila, and will probably be auctioned at some point.

Abandoned tanker and crew off Manila

The 'Celanova' and its crew of 15 remained stranded one nautical mile from the shore of Manila four months after it was abandoned by its owner and eventually held by Philippine port state control authorities for rudder damage and several technical issues. But as travel restrictions were eased and lockdowns were lifted by the Philippine government, the 'Celanova' still has no immediate respite from its uncertain conditions. It was towed nearer to the port of Manila from its original position for safety reasons. The owner went bankrupt and tried to sell the vessel to pay four months’ worth of back wages of its crew. The Spanish mortgage bank, Abanca, however, did not allow the transaction. The ITF notified and asked for assistance from the American Club (AC), the financial security provider of Celanova, on Feb 22. At that time, the crew was already unpaid for five months. It was not until June 5 when AC responded. AC asked for the ship to enter port for them to start taking responsibility. The ship's ordeal began on Dec. 7, 2019 when it broke down and lost its rudder off the Philippine coast. Ten days later, it was towed to anchor in Manila Bay and was detained on Feb. 14, 2020 by the Philippine port state control after authorities found it to be in breach of the Maritime Labor Convention (MLC) due to months of unpaid wages. Its 15 crew, 13 of which are Cubans and two are Spanish, were left without electricity, lights, refrigeration, global positioning system, security lights, and Wi-Fi. Their mobile phones have also run out of batteries and the vessel wsa dangerously low on fuel, food, fresh water and medicines. The crew have also been reported to be sleeping on deck as there is no air conditioning, but storms on the metro’s coast forced the seafarers to take shelter in the dark below the deck, rendering them helpless should the vessel drag its anchor with the strong currents. For months leading to the coronavirus disease (Covid-19) pandemic, the 'Celanova' and its men relied on the generosity and kindness of Filipinos who would bring them food, water and other provisions while anchored 13 nautical miles out at sea.

On May 31 the crew of the abandoned 'Celanova' received help from Filipino maritime professionals in the vicinity waters of Manila Bay. A Coast Guard vessel went alongside to bring supplies that they have been longing for since they were abandoned by their ship owner in December 2019.