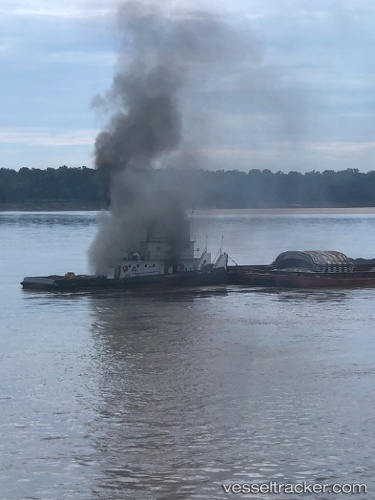 On Oct 17, 2019, the National Transportation Safety Board (NTSB), released a report in reference to the fire on board the 'Capt. George Brumley', (218 gt, built 1968), currently sailing as 'Jacob Kyle Rusthoven', on Sep 12, 2018. According to the statement, the probable cause of the engine room fire that resulted in the complete burning of the vessel was an engine lube oil leak. Also, lack of crew measures to activate fuel supply shut-offs and secure open doors ventilating the engine room contributed to its severity. At the time of the incident, the vessel was being operated with a six-man crew. It had picked up a nine-barge tow with limestone at Mile 19 on the Tennessee River and was headed to Baptiste Collette Bayou, to discharge cargo.

The US Coast Guard responded to a fire aboard the "Jacob Kyle Rusthoven" on the lower Mississippi River near West Helena, Arkansas, on Sep 12, 2018. Coast Guard Lower Mississippi River watchstanders received a notification at 10:30 a.m. of the fire aboard the tug near mile marker 673 on the lower Mississippi River. The "Jacob Kyle Rusthoven" was pushed to the Arkansas bank of the river where fire-fighting efforts continued. There were 13,300 gallons of fuel onboard with no reports of pollution at this time. The Coast Guard issued a waterway closure between mile marker 664 and mile marker 674 on the Mississippi River. The crew of the tug was safe. Three of the rock loaded barges broke free during the incident, but were later recovered. Report with photo and video: https://coastguardnews.com/coast-guard-responds-to-vessel-fire-on-mississippi-river/2018/09/12/ https://www.youtube.com/watch?time_continue=7&v=zlu3p_WhTYY