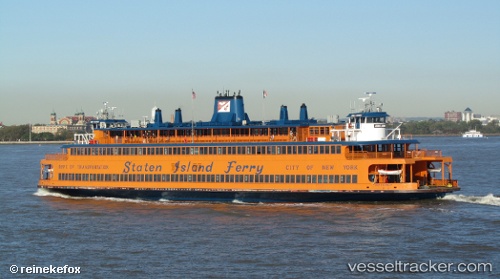 The “Saturday Night Live” stars and Shaolin natives Pete Davidson and Colin Jost have purchased the 'John F. Kennedy' for $280,000. The idea is to turn the space into a live entertainment event space, with comedy, music, art etc. The New York City Department of Citywide Administrative Services had put the ship up for auction. Italia has 10 days to get the vessel out of the St. George Ferry Terminal. Plans were being made to tow the ship b to a local shipyard, until a long-term location is found. Bidding on the nearly 60-year-old vessel began at $125,000. The proceeds from the $280,100 purchase will go to the city’s general fund. The ferry is structurally sound, the Department of Citywide Administrative Services said. Report with photos: https://nypost.com/2022/01/21/pete-davidson-and-colin-jost-buy-old-staten-island-ferry-boat/

Ferry to be auctioned after retirement due to mechanical issues

The 'John F. Kennedy' of the Staten Island Ferry fleet, which completed its final trip in August 2021, after spending over five decades of service, is now listed for public auction for a reduced price of $125,000. The vessel, on the auction block until Jan. 19, 2022, was initially listed for $250,000 by the New York City Department of Citywide Administrative Services. As of Jan 16, there have been no bids. While the hull remains in good condition, the sip has been listed in poor condition due to mechanical issues of the propulsion, and is being sold in an “as is” and “where is” condition. Prior to its retirement, the 'John F. Kennedy' was the oldest remaining boat in the Staten Island Ferry’s active fleet and the first Staten Island Ferry with diesel-electric propulsion machinery.

The "John F. Kennedy" caught fire at the Staten Island Ferry Terminal in St. George on Dec 16, 2017, shortly after 9 a.m. at the Ferry Terminal in St. George. The fire started at the machine room of theferry and was controlled within half an hour by the FDNY. The ship was on the dry dock for repairs. One civilian suffered a minor injury. The patient was transported to Richmond University Medical Center in West Brighton.