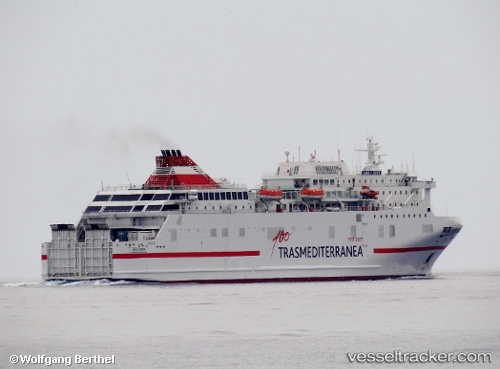 Coming from Melilla, the "Juan J. Sister" in the evening Feb 16, 2015, suffered mechanical trouble and slammed into the pier Muelle Uno while entering the port of Málaga. The ferry damaged two pleasure boats which were moored there with its bulb. One of the boats, the 10-m-Furia 34-yacht "La huida" took up a large amount of water and had to be pumped out by the fire brigade, and also the quay was damaged, but no injuries were reported. The ferry docked at Canovas (Muelle 3) around 8 p.m. The scheduled departure at 11 p.m. was cancelled, which affected a total of 210 passengers. The Maritime Station was open all night to host exceptionally affected passengers who were forced to spend the night in the city. Technicians were called determine what caused the accident, and divers were called to carry out a hull inspection. For this purpose the ferry shifted to the quay Romero Dobledo around midnight. Spanish reports with photos and videos: http://www.elmundo.es/andalucia/2015/02/16/54e24ec3268e3e935a8b4570.html http://www.diariosur.es/malaga-capital/201502/16/melillero-choca-contra-muelle-20150216203021.html http://es.euronews.com/teletipos/2942488-el-barco-de-linea-con-melilla-choca-contra-un-muelle-y-un-yate-en-malaga/

The "Juan J. Sister" on its way between Málaga and Melilla, went to the aid of a small inflatable boat carrying 44 Sub-Saharan immigrants which had got into difficulty when some 40 miles off the Granada coastline. The ferry picked up 44 people, 21 men, and 18 women, two of who were pregnant, and two babies. They all arrived in Melilla port, the ferry’s destination, on Dec 8, 2010, at 10 p.m., and were found to be in good health. The customs vessel "Salvarmar Hamai", based in Motril, had earlier been scrambled along with a helicopter in the search for the inflatable which had left Morocco on Dec 7 night, after an anonymous phone call. The group will be brought to Motril on Dec 9 ahead of repatriation.