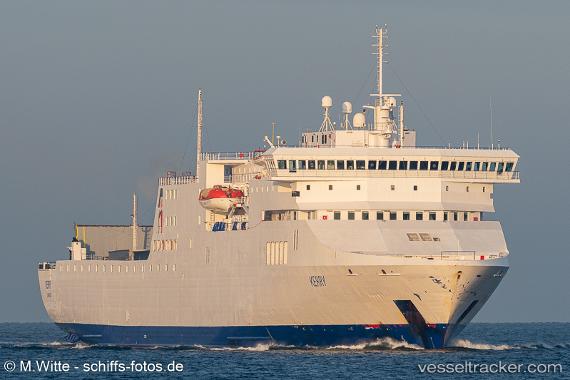 The Santander Port Authority and the shipping company Brittany Ferries investigated the causes of an oil spill in the Admiral's Dock on Dec 29, 2019, apparently due to a start failure of one of the engines of the 'Kerry', which was about to sail to the port of Cork. An oil film of about 75 meters length has since been removed. The Port Authority, has inspected the area to verify that there were no remains under the structure of the docks. Due to the low tide, the stain had extended to the Embarcadero Palace but did not drift any further thanks to the rapid intervention of theanti pollution vesssel 'Urgarbi II'. The Seprona (Nature Protection Service) of the Civil Guard were also called to take samples of the waste. In a little more than 3,5 hours the area was clean so the anti pollution plan was deactivated.

China and the Republic of Korea (ROK) will be connected for the first time by a ro-ro passenger ferry that is scheduled to be operational in early July, sources with the ferry's operator said on Tuesday. The ferry, " STENA EGERIA ", will link Yantai in east China's Shandong Province with ROK's port city of Pyeongtaek, some 70 km south of Seoul, said Yu Xinjian, board chairman of Yantai Bohai International Ferry Co., Ltd. (YBIFC). A ro-ro ferry can carry wheeled cargo, such as cars and trucks. According to the lease agreement the ferry will sail between Yantai and Pyeongtaek three times a week. It will take the vessel 15 hours for a one-way journey of 273 sea miles (506 km). The 186.5-meter ferry has a gross tonnage of 24,418 tonnes and 518 passenger spaces. With a top speed of 23 knots, it can carry containers f 300 teu (twenty-foot equivalent unit). o "Besides passengers and containers, the ferry can also transport cars and tourist buses between the two cities," said Wang Jianbo of Bohai Ferry Co., Ltd, the parent company of YBIFC. China and ROK have witnessed fast development of bilateral trade over the past decade. China is the largest trade partner for ROK and trade between the two countries reached 274.25 billion U.S. dollars in 2013, according to the General Administration of Customs.