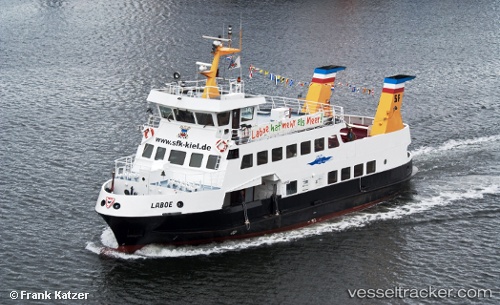 Allision after heart attack of master

The "Laboe" 266 gt (IMO: 8400086), allided with a pier of the Ostsee Quay when leaving the Seegarten Pier in Kiel on Apr 26, 2017, at 8.41 Uhr a.m. The master had suffered a heart attack during the mooring manoever. One more crew member was injured in the accident. By chance two nurses were among the nine passengers on board who immediately treated the men. Both were taken to hospital with two ambulance. The passengers were taken over by the ferry "Strande". The water police Kiel launched an investigation. The ship which had suffered slight damage was taken to the SFK-pier in inner port of Kiel after the accident. Also the pier was slightly damaged and was being surveyed in the run of the day. German report with photo:http://www.shz.de/regionales/kiel/zwei-verletzte-foerdedampfer-laboe-rammt-anleger-id16673996.html

Passenger ferry pushed aground in Mönkeberg

On Apr 14, 2014, at 1 p.m. the "Laboe" was pushed onto the shore of Mönkeberg in the Kiel Bight during berthing manoevers due to the stormy west wind. The ship got stuck parallel to the beach between the jetty and the marina and was unable to come off again. The tug "Falckenstein", also being owned by the Schlepp- und Fährgesellschaft Kiel, was called and pulled the passenger ferry off at 2 p.m. After first inspections during which no damage was found the ship was able to proceed to its scheduled destination Laboe before returning to the SFK base at Kiel at 4.50 p.m. for further investigations. The "Laboe" resumed its service in the morning of Apr 15 as scheduled.

After the allision of the "Laboe", 295 gt (IMO: 8400086), and the Bellevue Pier in the port of Kiel on Mar 25 the damaged pier has been partially re-opened in the morning of Mar 26. The wooden staircase, railings and a destroyed lantern will, however, have to be replaced. Experts had been taken to the accident site aboard the tug "Holtenau" and surveyed the damage. Investigations of the "Laboe" were undertaken too, and it was found out, that no technical issues had caused the allision, so that the ship could remain in service. Only the bow had suffered scratches. German report with photos: http://www.kn-online.de/Lokales/Kiel/Anleger-bleibt-vorerst-gesperrt