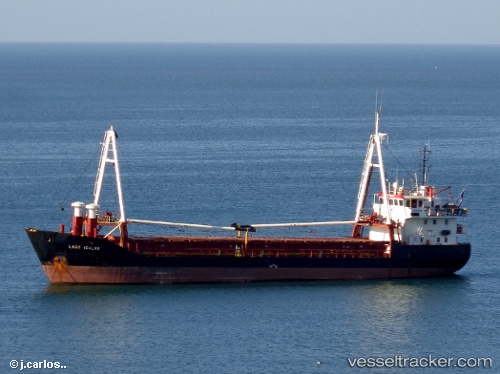 About 50 liters oil were spilled on Apr 25, 2018, at 2 p.m. off the Isla de Pascua into the bight of Hanga Roa, when the barge “Rano Aroi II” of the Sociedad Agrícola y Servicios Isla de Pascua allided with the anchored “Lago Icalma” during unloading operations. The hull of the freighter was breached. The emergency response protocols were immediately activated by the port captain, and the Chilean Navy was tasked to contain the spill. The "LSR Tokerau“ and other boats were on scene and laid out an oil boom around the "Lago Icalma" as well as absorbent pads. The leak in the hull could be sealed and the oil leakage stopped. The situation was brought under control and the Navy was focusing on the task of eliminating oily residues and safeguarding the aquatic environment. The damage to the eco system was later to be evaluated by taking water samples. Reports with photos and video: https://mundo.sputniknews.com/americalatina/201804261078212116-chile-derrame-petroleo-choque/ http://www.soychile.cl/Valparaiso/Sociedad/2018/04/25/530099/Armada-contuvo-derrame-de-combustible-tras-colision-de-embarcaciones-en-Isla-de-Pascua.aspx?utm_source=Valparaiso&utm_medium=RSS&utm_campaign=Robots https://www.armada.cl/armada/noticias-navales/armada-controla-derrame-de-combustible-en-isla-de-pascua/2018-04-25/190519.html https://www.maritime-executive.com/article/photos-fuel-spill-at-easter-island-s-main-harbor#gs.b2WI5OU

Rockets shipped to Bahrain while Denmark condems the regime

The shipping company H. Folmer & Co. has sent the "Danica Brown" to Bahrain with a cargo of weapons of the kingdom, while the official Denmark condemns the regime for having imprisoned and tortured the Danish national Abdulhadi al-Khawaja. The cargo of rocket engines is expected to arrive within a few days. The ship put out from the U.S. in late April.

A cargo vessel that was loaded with explosives in the UK for Jeddah (Saudi Arabia), developed main engine trouble on May 18, 2015, when about 200 miles off Gibraltar, and ended up being towed to the British dependent territory at the western entrance to the Mediterranean. "The "Danica Brown" was carrying a mix of ammunition, such as bombs and small arms," said a Gibraltar port spokesman."It loaded explosives in the UK for Jeddah." On arrival in Gibraltar last Wednesday it was berthed in GibDock repair yard within the port of Gibraltar. It was after an inspection by the Gibraltar fire brigade, that the ship was ordered to be towed out to the eastside anchorage, away from it being close to Gibraltar's highly-populated town area on the western littoral. Spares arrived on Saturday but the ship was not repaired in Gibraltar for reasons unknown. Instead, the Danish-flag 'Danica Brown', of 997 gross tons, left Gibraltar late Sunday and was being towed Monday into the Mediterranean "to an undisclosed destination," said official source.http://www.panorama.gi/localnews/headlines.php?action=view_article&article=7442&offset=0