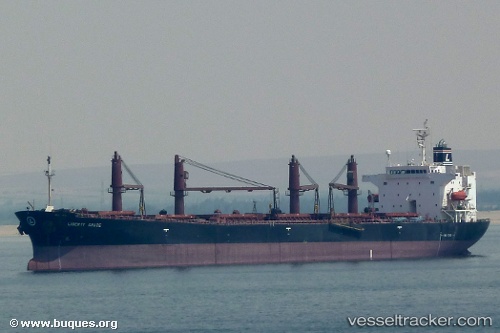 The "Liberty Grace" was set to arrive off the east end of Bermuda on Oct 16, 2018, to transfer a 67-year-old male crew member who has been suffering from unexplained dizziness. The ship was on route from Galveston, Texas bound for Malta in the Mediterranean. The transfer via the pilot/rescue boat "St. David" took place at 5 p.m. for onward evacuation to King Edward VII Memorial Hospital.

PORT SUDAN - Dockers began unloading tens of thousands of tonnes of food from a US aid ship on Thursday destined for war-torn areas of Sudan, an AFP correspondent reported. The bulk carrier Liberty Grace docked in Port Sudan on the Red Sea coast with a cargo of 47,500 tonnes of sorghum, a staple food in Sudan. Dozens of stevedores were unloading the shipment onto waiting trucks. "It will take 14 days to unload" the entire shipment, said the ship's captain Peter Matesic. It was his third trip to Sudan with a cargo of food aid. A member of the crew said the vessel took 25 days to reach Port Sudan from Houston, Texas. The food aid organised by the US Agency for International Development and the World Food Programme was to be delivered to several war-torn areas of Sudan but mainly to Darfur. https://www.enca.com/africa/us-aid-ship-docks-with-food-for-sudan-war-zones

The "Liberty Grace" was involved in the rescue of more than 230 Syrian refugees from a a Turkish fishing trawler that was adrift 120 nautical miles southeast of Sicily. The "Liberty Grace" was transiting in ballast from the Suez Canal to Galveston when she was directed by the Italian Coast Guard to render assistance to the refugees. On Nov 17, 2014, at 0910 ha.m. the "Liberty Grace" was on station and began taking aboard the 230+ refugees, who included 65 women and children. The Italian Coast Guard remained on site watching the boarding, for the safety and security of the crew of the "Liberty Grace" as well as for safe embarkation of the refugees. The crew of the "Liberty Grace" established a feeding station on deck to provide food and water to the exhausted refugees. The vessel also provided blankets and clothing to those in need. Some of the refugees said they were doctors, engineers and other professionals, all seeking to escape Syria's war torn towns of Aleppo, Homs and others- They said that the captain and crew of the Turkish trawler set them on a course towards Italy and then deserted the refugees by embarking onto speed boats.On Nov 18 all refugees safely disembarked at Porto Empedocle where they were received on shore by United Nations High Council for Refugees along with the Red Cross and medical volunteer crews.