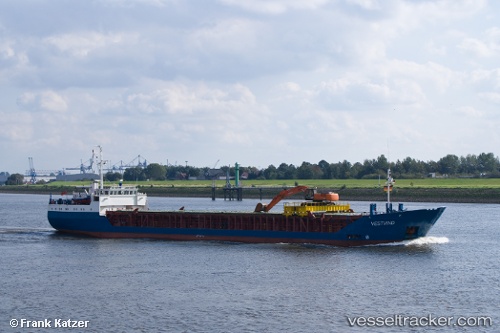 The "Lill" drifted across the southern port of Randers on Jan 19, 2018, at noon, after the propeller got fouled by an obstruction. The vessel blocked the basin for more than 30 minutes. The ship had come from Oslo. After the ship could be manoevered out of its position, a diver removed the obstruction which was found to be a rope. Before, the attempt to dock had been obstructed by the stormy winds. Danish report with photos: https://www.tv2ostjylland.dk/artikel/stort-norsk-skib-sidder-fast-i-randers-havn

In the morning of Nov 3, 2016, at 7.35 a.m. the "Lill". whilst coming from Sølvesborg, allided with the outer jetty during the approach to Rønne. The ship suffered a large hole in the hull, and will now be examined before it can proceed. On Nov 6 at the earliest the ship will be surveyed by a diver. The Bornholm Police was notified only at 12:38 a.m. and then made sure that the ship was detained. The delay of five hours before the accident was a violation of law. Both the captain and first mate were alcohol tested without result. Everything indicated that the cause of the accident was crosswind and too little engine power. The ship left the port of Rønne after inspections on Nov 4 around 11 p.m. and berthed at the Gdynia Shipyard in Gdynia on Nov 5 at 6 p.m. for repairs of grounding damage. Danish report with photo: http://tidende.dk/?Id=76733

The "Vestvind", coming from Forsand, ran aground on Sep 12, 2014, at Vatlestraumen close to Bjorøy. The police and RCC South Norway were notifired at 04.42 a.m. The crew of seven was safe, and there was no leakage. First attempts to pull it off with the lifeboat "Kristian G. Jebsen" at 5.40 a.m. and later by the Coastguard vessel "Tor" failed. At 8 p.m. the "Tor" succeeded to get the ship off, and it docked at Bergen at 9 a.m. Divers were called to check if there was damage to the hull. The vessel had run aground at low speed. Norwegian reports with photos and video: http://www.ba.no/nyheter/article7579112.ece http://www.nrk.no/hordaland/lastebat-pa-grunn-i-vatlestraumen-1.11928358